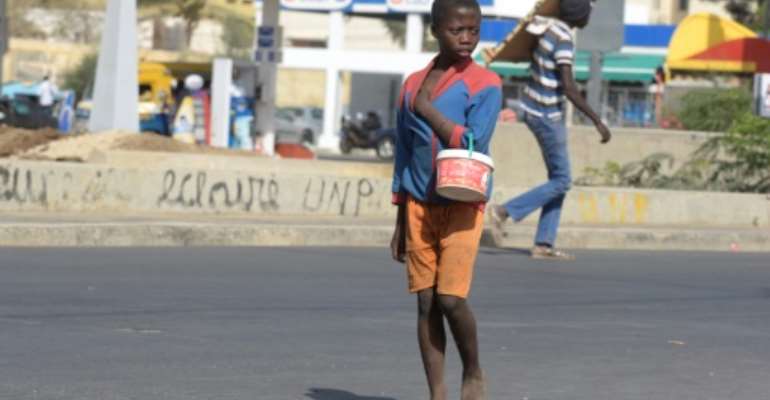 Students from poor rural families sent to Dakar and other Senegalese cities to memorise the Koran are often left vulnerable to abuse and receive little education. By SEYLLOU (AFP/File)

In the Muslim-majority nation where religious leaders wield wide social and political influence, poor children have long been entrusted to Koranic schools, called daaras, for education.

In its report on the young students known as "talibes", the New York-based rights group and PPDH, a coalition of Senegalese groups, called on President Macky Sall to implement large-scale measures to protect tens of thousands of children living in unregulated daaras.

The report documents the deaths of 16 talibes from 2017-2018 from beatings, neglect or endangerment, and other cases of rape, sexual abuse and being forced to beg in the streets.

Some children reported being imprisoned by their teachers in cell-like rooms for weeks or months at a time. Others caught trying to flee said they were chained up to prevent them from trying to escape again.

"Senegalese authorities say they are committed to protecting children and ending forced child begging, so why are so many abusive, exploitative, or dangerous daaras still operating?"

Past attempts to crack down on forced child begging -- often by talibes -- were praised by children's groups but greeted with anger by powerful Islamic figures in Senegal.

Often from poor rural families, the talibes are sent to Dakar and other Senegalese cities nominally to memorise the Koran, but are often left vulnerable to abuse and receive little education.

"I didn't like the daara because they hit us all the time -- if we didn't memorise the verses of the Quran, or if we didn't bring money," said a 9-year-old talibe in the HRW report, who fled his daara in Dakar to escape abuse in 2018. "At the daara, they beat you until you think you will die."

HRW said that while many Koranic teachers in Senegal do not force children to beg and treat them decently, others continue to abuse and neglect those entrusted to them.

Human Rights Watch estimates that over 100,000 talibe children in Senegal are forced by their Koranic teachers -- also known as marabouts -- to go out into the streets daily and beg for food, money, rice or sugar. Many set begging quotas enforced with often-severe beatings.

Anti-LGBT Bill: Let's be careful and not generate intense ha...
52 minutes ago