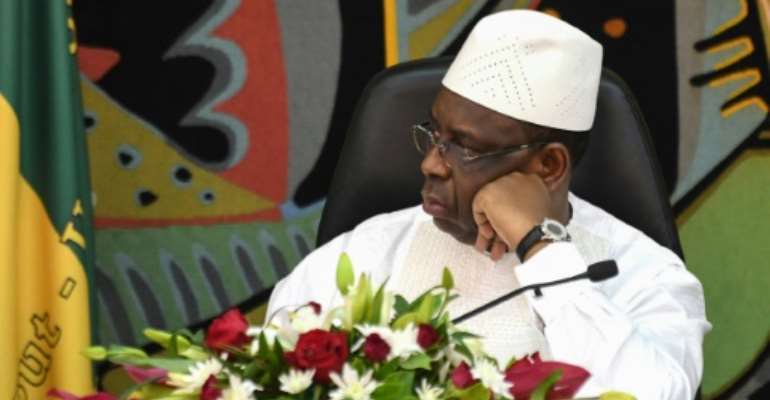 Senegal's President Macky Sall has suggested the BBC report was an attempt to destabilise the country. By Seyllou (AFP)

The statement by the ministry calling for a "complete inquiry" was issued a week after the BBC investigation aired June 3 and caused an outcry in the impoverished West African country, where oil and gas finds over the past five years have stoked public expectations of a bonanza.

In its report, the BBC said that just after being elected in 2012 President Macky Sall awarded a contract set up by his predecessor giving exploitation rights to two gas field to the Timis Corporation, a company controlled by an Australian-Romanian businessman, Frank Timis.

BP paid $250 million (222 million euros) to Timis Corp., together with a commitment to pay royalties of around $10 billion over 40 years, it said.

The British broadcaster said the Timis Corp. also secretly paid a "bonus" of $250,000 (222,000 euros) to Agritrans, a company controlled by Sall's younger brother, Aliou Sall, who was also employed by the Timis group with a $25,000-a-month salary.

Aliou stepped down in October 2016 after being accused of a conflict of interest by the opposition. He was appointed head of a state-run savings deposit bank, the CDC, in 2017.

He denied the report and said he would sue the BBC for defamation.

BP's head in Senegal, Geraud Moussarie, on Thursday told a news conference the figures in the gas contract were "confidential" but described the reported compensation figure as "so fake and exaggerated that it is complete fantasy".

He also dismissed the idea that Senegal was being cheated.

Call for US, UK probes

President Sall has suggested the BBC report was an attempt to "destabilise" the country. He added that he wanted the truth to be "reestablished" but "we will not accept false accusations".

In its statement Monday, the justice ministry said that the state prosecutor had been tasked with the probe, "mindful of the need to keep the Senegalese informed about the management of natural resources".

It mentioned a document making the rounds on social media that, though not authenticated, purported to be a secret 2012 government report noting shortcomings in how the gas contract was awarded.

The main opposition coalition, the FRN, called on authorities in the US and Britain to investigate, given that BP shares are traded in both countries and because it "expected nothing" to come from the Senegalese probe.

The FRN demanded that Aliou Sall step down and that the 2012 government report be declassified.

Various associations have called a protest for Friday, urging Senegalese in the capital and elsewhere to demonstrate over the alleged wrongdoing.