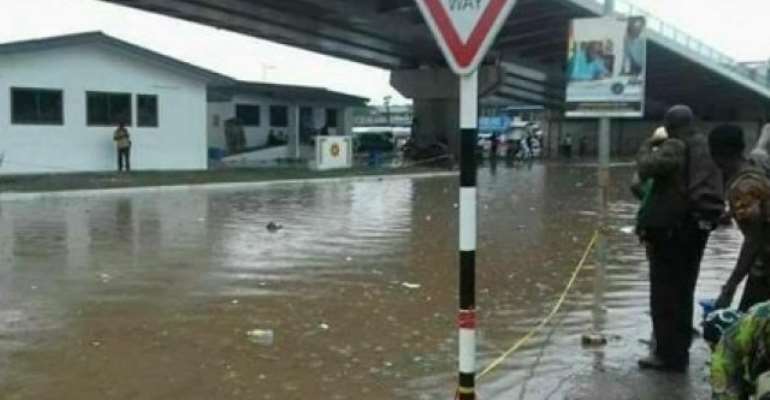 In ancient times, floods were believed to be sent by deities and are usually acts of divine retribution but in our century, floods are caused by seasonal rainfall combined with poor drainage, the dumping waste into waterways and the low elevation of settlements.

The last 50 years have seen 4 million people being affected by the recurrent floods, resulting in economic damage exceeding USD$780 million.

Ghana has had a problem with proper waste management resulting in huge solid waste problems. In most of our communities today, there are challenges when it comes to disposal of refuses and this is as result of the unavailability of dustbins, refuse dump sites etc.

Earlier last year, some communities in Northern and Upper East regions of Ghana were affected by the heavy and continuous rainfalls which later worsened by the annual opening of the Bargre dam.

According to the National Disaster Management Organization, (NADMO), last year alone, over 11.956.6 hectares of farmlands were affected by flooding posing flood insecurity risk to the communities.

Poor planning of towns and cities, improper and haphazardly layout of various buildings in a locality, improper disposal of refuse is known to be one of the extreme challenges the country is facing today. A situation which stems from the discipline of the members of the community through the improper disposal of refuse into gutters. There are other causes such as low level and flat land, improper enforcement of laws on building construction and sanitation, heavy rains, overflowing, broken dams just to mention a few are all causes of floods.

Floods impact on both individuals and communities have social, economic and environmental consequences. The consequences of floods, both negative and positive, vary greatly depending on the location and extent of the flood, and the vulnerability and value of the naturally constructed environment they affect. Some of these effects, goes a long way to damage public infrastructure which affects a far greater proportions of the population than those whose homes or business are directly inundated by the flood. They can also cause damage to private property including homes and businesses. Losses occur due to damage to both the structure and contents of buildings. In the agriculture sectors, they lead to widespread damage to crops, fencing and livestock. Crop losses through rain damage, waterlogged soils, and delays in harvesting are later intensified by transport problems due to flooded roads and damaged infrastructure. To continue with, the negative socio-economic impact of floods are loss of lives and properties, loss of livelihood, mass migration, psychological effects, hindering economic growth and development etc.

In other to curb it, there are ways one can take into consideration in others to prevent floods. That is, the increase spending on flood defenses, protect wetlands and the strategic planting of trees, introduce more water storage areas, put up more flood barriers, modify homes and businesses to help them withstand the seasonal heavy downpour.