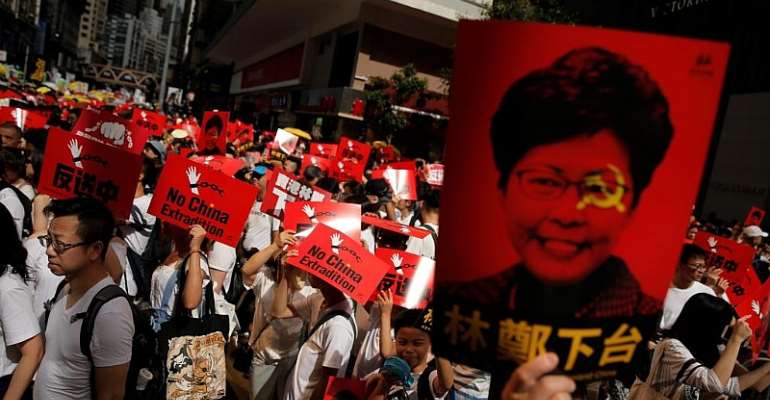 China on Monday strongly backed the Hong Kong government on a controversial proposed law that would allow extraditions to the mainland, and voiced opposition to "outside interference" following a massive protest against the legislation. But a mass extradition of Taiwanese suspected fraudsters from Spain to Beijing shows an increase of China's judicial reach worldwide.

Last week, Spain extradited 94 Taiwanese citizens to Mainland China. They were part of a total of 269 Chinese and mainland individuals who were arrested in 2016 after a massive joint Spanish-Chinese operation that involved 600 Spanish and 100 Chinese police – a first.

This action, called the “Great Wall Operation,” lasted five months and ended in December 2016, according to the official Chinese Xinhua News Agency.

According to a 2016 press release by the Spanish police, the suspects worked out of 13 villa's where phone operators worked “around the clock” in “secretive conditions” targeting people in mainland China and successfully extorting over €15 million.

The massive operation seems to outweigh the amount of money involved, but its symbolic value is substantial.

After an extradition request on January 1, 2017 by the Chinese Ministry of Public Security, Spain's Foreign Ministry agreed to send the mostly Taiwanese suspects to Beijing.

Death penalty
“We are dismayed by the decision by the Spanish courts to extradite these individuals,” the UN Office for the High Commissioner for Human Rights said in a statement in May 2018, calling upon Spain to "halt" the extraditions.

“The ruling clearly contravenes Spain's international commitment to refrain from expelling [ ... ] people to any State where there are well-founded reasons to believe that they might be in danger of being subjected to torture” or death penalty, the statement continues.

But China's Xinhua News Agency lauds the Chinese decision, quoting Director of China's Criminal Investigation Bureau as “praising the Spanish' governments adherence to the 'One China Principle' ,” meaning that Spain recognizes Taiwan as an “inseparable part” of Mainland China.

Beijing demands from any country that wants diplomatic ties that it cuts all official ties with Taipei and recognizes Beijing as China's only legitimate ruler.

Hong Kong protests against extradition law
Meanwhile, in Hong Kong, over a million people (organisers estimates) protesters on Sunday against a law that would permit anyone who stays in the territory, to be extradited to “any jurisdiction,” including Mainland China.

On Monday, Chinese Foreign Ministry spokesperson Gang Shuang said that Beijing “will continue to firmly support" the Hong Kong administration, where pro-Beijing Chief-Executive Carrie Lam earlier in the day refused to even delaying the law.

The decision sets her administration on a collision course with opponents who decried her stance and called on supporters to rally outside parliament on Wednesday or hold strikes.

The proposed law has sparked an opposition that unites a wide demographic, setting off the largest demonstrations since 2014 pro-democracy protests brought parts of the city to a standstill for two months.

Suspicion of China was worsened by a series of high profile disappearances of people who later appeared in mainland detention, including a group of dissident publishers and a billionaire who disappeared from a top hotel.

Paris signed the treaty in 2007 but France can refuse extradition if a suspect may be sentenced to death after his return to China.

Extradition of Taiwanese residents to China is still extremely rare, only Indonesia, Cambodia and Kenia preceded Spain in sending Taiwanese suspects to Beijing to face prosecution.