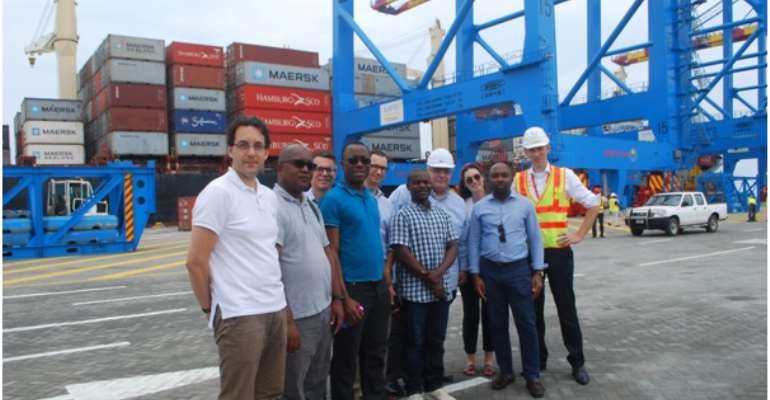 A team from the International Monetary Fund (IMF) led by the Resident Representative to Ghana, Albert Touna-Mama has paid a visit to the Meridian Port Services Ltd and the Port Expansion Project.

The official visit was to provide further insight into the overall digitalization of the Tema Port operations, specifically the paperless process.

Welcoming the team, Chief Executive Officer of Meridian Port Services Ltd, Mohamed Samara touted the successes chalked by the company over the past decade and described it as one of the most successful models of Private Public Partnership (PPP) in Ghana where a major infrastructure project was financed through private-public partnership. MPS is a joint venture company between Ghana Ports & Harbours Authority and two of the world-renowned port operators APM Terminal and Bollore Transport & Logistics.

For the IMF inquiry on the project finance, the MPS CEO opined that the Shareholders opted to go with theInternational Finance Corporation (IFC), a member of the World Bank Group. The IFC is the largest global development institution specializing in private sector investment in emerging markets.

The immediate cash flow need for the Tema Port Expansion Project wasUSD 1 Billion. MPS secured a $667 million project financing package arranged by the IFC, while the MPS shareholders provided the rest of the funding as fresh equity amounting to $333 million.

The financing package for the construction of a new Port in Tema represents IFC's largest port investment and biggest infrastructure mobilization to date in Sub-Saharan Africa. It includes $195 million from the IFC's own account and $472 million from three commercial banks – the Bank of China, the Industrial and Commercial Bank of China, and Standard Bank as well as the Dutch development bank FMO.

Mr. Samara affirmed that “the MPS investment is an attestation to the realisation of the GHANA BEYOND AID vision of HE. President Akufo-Addo. Moreover, MPS is gearing up to deliver on His Excellency's longer-term goal for Ghana to become a thriving emerging market economy-one that has the capacity to unlock the full potential of Ghanaians, young and old, rich and poor, here in Greater Accra and across this nation.”

The MPS Senior Management Team took the delegation through a presentation covering background and future development demonstrating how MPS, since its inception, has pushed the frontiers to establish the most efficient port in West and Central Africaregion.

MPS has been paperless from the beginning of its operations with the introduction of its novel terminal operating system (TOS) NAVIS- 4 which has subsequently been upgraded over the last years. The terminal also introduced the berthing system thereby reducing anchorage time which translates into mammoth reduction of costs in freight.

The CEO of MPS intimated that the previously applied Port Congestion Surcharge has been eliminated saving the Ghanaian Economy huge sums of money and improving cost of doing business at the Tema Port. He further stated that the freight rate from the Far East to Tema is at least USD1, 000 less than that of Lagos and several other ports.

Few videos were displayed including a virtual drive through the new facility which is equipped with the most advanced technology in full compliance with the Government's efficiency drive with secured Paperless processes that safeguards the national revenue collection.

From the Boardroom presentation the IMF team was taken on a tour of the Terminalto have a real feel of what was seen in the virtual drive through video. Mark Nolet, Project Director, highlighted “What we have here is a facility that is fitted with the best of Gantry Cranes and technology; key among these are the drive-through Scanners, Biometric Access Control, CCTV, Radio Frequency Identification (RFID), Optical Character Recognition (OCR), License Plate Recognition (LPR) Portal and the weighbridges. “

It was further noted that the Customs Division of the Ghana Revenue Authority (GRA) is in control of the delivery processes through theSingle Window Platform as well as to generate the after-scan verdict.

MPS envisages that this new Terminal-3 is an investment in the right direction which will push the agenda of the free continental Single Market trade. It will create new routes and direct connections giving access to entrepreneurs to grow their businesses and thrive.

With a doubling of the current market capacity of Ghana at the opening of the new port facility to 2 million TEUs, the rippling effects of these would be the improvement in the quality and quantity of employment and increased fiscal revenue.

The IMF teamwere particularly thrilled to witness the berthing of the first commercial vessel, a test vessel to begin trial operations of the newly completed first phase of the terminal.

Mr. Albert Touna-Mama, The IMF Resident Representative to Ghana, commended the CEO and Management team for the impressive port development which in his and his team's estimation was an exciting and eye-opening event. He added, “visiting the MPS port facility is giving us great comfort that Ghana is moving in the right direction”.