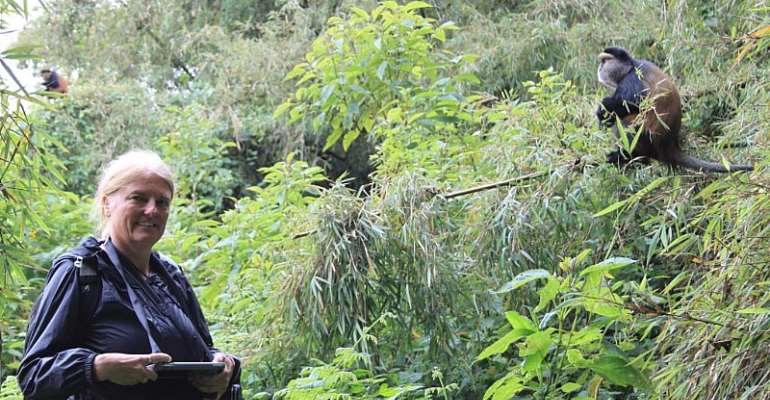 A British primatologist has been working with scientists in the US to develop a facial recognition app that will help her and others research and protect rare golden monkeys in Rwanda.

Golden monkeys are an endangered species in the Virunga Mountains that straddle Rwanda, Uganda and the Democratic Republic of Congo, which is where the famous mountain gorillas live.

Sue Wiper spent a year-and-a-half studying the monkeys in high-altitude bamboo forest in Rwanda's Volcanoes National Park. It was part of her ongoing PhD research with the University of Chester.

Golden monkeys -- on the Red List of threatened species compiled by the International Union for Conservation of Nature -- live in large groups with, as Wiper discovered, more than one male in them throughout the year. To probe these social dynamics, the scientist needed to individually identify members of the troop.

And that was the challenge. Golden monkeys are stunning to look at, with long golden facial hair and bright orange backs. But they all look alike. And while that might seem the case to anyone who's casually interacted with any kind of monkey, it is particularly the case with golden monkeys, says Wiper. They really do all look identical to the human eye.

Challenge of telling monkeys apart
“One of the reasons that research has not been conducted on the golden monkeys is the problems of identification which is imperative when looking at social behaviour,” she told RFI.

Wiper first went through the painstaking process of finding any distinctive feature she could. Male golden monkeys are bigger than females. That was a start. “Scars on the ears, broken fingers, hairs on the nose,” could sometimes tell individual males apart she said.

Females could be pinpointed by nicks in their ears or sometimes by the length of their nipples. Even by the pigmentation on their nipples. Still, says Wiper, “it was a very long process.”

After reading about a facial recognition app that researchers in Michigan State University's department of computer science and engineering had developed for lemurs (a species of primate unique to Madagascar), Wiper reached out to them.

They worked together -- and this has led to the PrimID app. Scientists can use it on their smartphones to positively identify individual golden monkeys in the field. It can also be used for lemurs, chimpanzees and other primates whose images are loaded onto the database.

App halves time and research
To help develop the app, Wiper contributed 1,450 face images and dozens of video clips she obtained of the golden monkeys in her patch of the Volcanoes National Park.

A paper she co-authored with the MSU scientists noted that designing face recognition applications for primates comes with challenges due to “the presence of variations in hair and fur, low contrast between eyes and background, and variation in eye colors across different individuals.”

“Historically, primatologists need to spend time learning individuals before they can start to conduct research. If each field site only needs to do this once and then use the app this will save valuable time and research can start earlier,” she explained.

Only an estimated 500 golden monkeys exist in the wild in Rwanda and Uganda. It is unclear how many are in the DRC, where the monkeys also live.