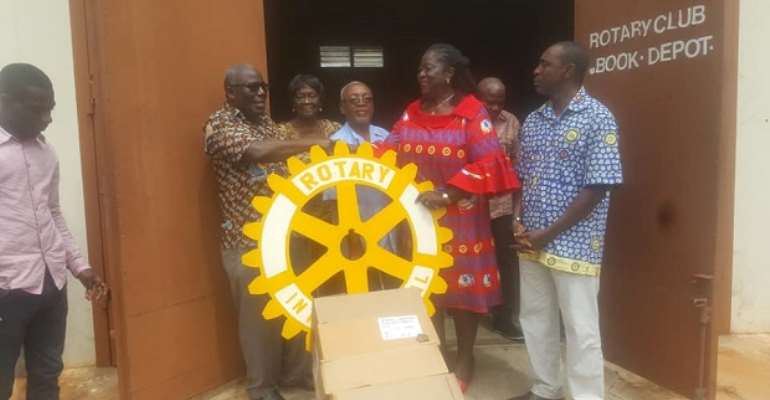 The Rotary Club of Tema in the Greater Accra Region has presented textbooks to 56 selected public schools in the country.

The current gesture, worth about $15, 000 and forms part of the club's project dubbed: “The Book Project”, is aimed at encouraging children to develop a positive attitude towards learning. It was funded by the Brothers Brothers Foundation in the United States of America (USA).

Over the years, Rotary, in partnership with the Brothers Brothers Foundation, has donated books to junior, senior high schools and tertiary institutions to the tune of over $2 million.

The President of Rotary Club of Tema, Rotarian Alexandre Owusu Akrofi, at a brief ceremony held at the Rotary Centre in Tema of the Greater Accra Region to present the books to the beneficiary schools, expressed optimism that the gesture would improve reading skills among the pupils.

He said the gesture “is to ensure that the children of this country are rich with knowledge and educated to become responsible and useful citizens in future. These books are normally not found in the market so when it comes, it is to help the schools beef up their libraries.”

He was optimistic that the books would also help build the students capacity and capability as far as research is concern.

The President, therefore, encouraged the pupils to make good use of the books, adding that it was sad that many pupils in public schools could not read or write.

Richard Odame, a Mathematics tutor at Benkum SHS, who spoke on behalf of the beneficiary schools, applauded the club for the gesture and pledged that they would ensure that the books were put to good use.

He believed that giving children good education would not only guarantee a brighter future for them alone but also the country as a whole hence the need for all support from individuals and organisations.

According to him, science and mathematics formed core values of any academic discipline, adding that donation of books forms part of the measures to encourage them to learn hard.

He, therefore, encouraged the club to continue to assist the schools, pointing out that reading performance of pupils in the beneficiary schools has improved since they received the first bunch of the books last year.