Don’t Make Shipwreck Of Your Life; The Truth About Irregular Migration 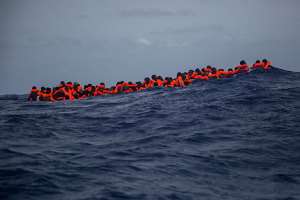 Life is full of experiences and there are times happenings in our environment bring are great opportunity to explore.

Other times, it might be threats as well, but in all these cases we must take appropriate steps and do the right thing.

It is common practice for most young people in Ghana and Africa to run away from their motherland when threats occur.

For them, it seemed extremely difficult to manage and turned threats to opportunities.

In times of hardship and when things are not moving well in their lives, the youth contemplate traveling, and in fact find possible and all available means to go abroad to seek greener pastures.

It’s either traveling via desert to Libya, or high seas to Morocco to reach Europe.

Traveling abroad in general is not a bad idea as it started from the ancient days of Abraham when God in His wisdom directed Abraham believed to be a hero of faith to live his homeland to a foreign nation.

However the big question potential migrants must contemplate or ask should be as to how to move- appropriate or approved routes.

Whatever situation someone finds himself or herself in has an end, but ones disposition determines what the end results.

Many promising African young people - male and female are into slavery, suffering and shame, whilst several others have made shipwreck of their lives through irregular migration.

There is no clear or universally accepted definition of irregular migration. From the perspective of destination countries it is entry, stay or work in a country without the necessary authorization or documents required under immigration regulations.

From the perspective of the sending country, the irregularity is for example seen in cases in which a person crosses an international boundary without a valid passport or travel document or does not fulfil the administrative requirements for leaving the country.

Instead of leaving the country through the appropriate routes, migrants risked their lives through the Sahara Desert to Libya and cross the Mediterranean to Europe.

The main cause of irregular migration is less a disregard of regulations by migrants than a continuing inequality within and between countries, and the failure of states to create adequate migration regimes to meet economic demand.

But, in Ghana and other African countries poverty, social and political instability, as well as limited availability of legal migration routes, push people towards criminal networks to facilitate their unauthorised entry into, transit through or stay in the Europe.

Irregular migration poses multiple challenges to countries of origin, transit and destination, as well as to migrants themselves.

Migrants in irregular situation are particularly vulnerable to discrimination, exploitation and abuse.

Such migrants are also in danger of being exploited by crime organizations involved in human trafficking and migrant smuggling—crimes that constitute a serious violation of the human rights of its victims.

Refugees and asylum seekers, despite the protection granted by international law, also face many difficulties in their migratory process, especially as the process of obtaining refugee status has become increasingly complicated, and it is more and more difficult to find countries willing to receive refugees.

Information from the Migration and Home Affairs of the European Commission shows that flow of irregular migrants entering the European Union (EU) reached unprecedented levels during 2015, and remained high in 2016.

During 2016, Member States reported new arrivals from Africa, the Middle East and Asia, many of whom turned to criminal networks of smugglers for assistance.

The journey to the European Union (EU) can be extremely dangerous and smugglers frequently expose migrants to both life-threatening risks and violence.

The UN Refugee Agency recently released 2018 tally for migrant journeys across the Mediterranean, and according to the release 2,262 people died or went missing last year attempting the crossing, a 28 percent drop since 2017.

Far fewer migrants are making the journey in the first place, and that’s what’s driving the decline and about 115,000 migrants landed in Europe last year, down from 172,000 the year before that.

The central Mediterranean route then became the most popular sea entry point and migrants, largely from sub-Saharan Africa, journey war-torn Libya in an attempt to reach Italy.

According to the Agency, overall deaths declined in 2018 because, in addition to the number of migrant journeys decreasing, the numbers taking the more dangerous central Mediterranean route have plunged.

Most migrants arrived last year via the western Mediterranean instead, with some 64,000 landing in Spain. Italy, by comparison, received 23,000, down five-fold from 119,000 in 2017 and more than 1,300 died last year taking the central Mediterranean route.

The uncontrolled loss of lives in the Mediterranean Sea demonstrates the need for an assertive and urgent response from the EU and African governments.

According to Chief Superintendent James Hayford Boadi, the Bono, Bono East and Ahafo Regional Head of the Immigration Information Centre of the GIS, irregular migration was becoming a national challenge which needed concerted efforts to tackle.

Most often Ghanaians voluntary returnees arrived without significant awareness of the changed dynamics in the country after years and sometimes decades of absence.

Research showed that the alienation experienced in the country had a direct effect on the ease of reintegration.

Currently, about 800,000 Ghanaians live and work outside their home country.

Chief Superintendent Boadi noted that since the migrants entered Europe irregularly, most of them only had the option of applying for asylum with little prospect of success while others lived precariously.

But, Mr. Kwasi Awuah Ababio, Director of Diasporian Affairs at the office of the President, said numerous economic opportunities were available in the country and advised the youth to stay home and take advantage of that to build their future.

He urged the youth who were determined to travel abroad to choose the regular labour migration routes in order not to be stranded.