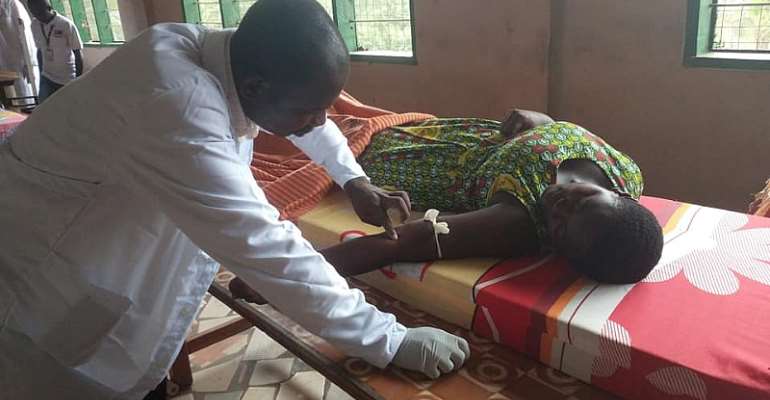 Staff of the Food and Drugs Authority in Sunyani last Friday joined students of the Gyamfi Kumanin Secondary-Technical School at Wamahinso in the Asutifi North District of the Ahafo region to donate blood to the regional Blood Bank at the Bono regional capital.

The exercise, which lasted for several hours, attracted about 152 blood donors and formed part of the corporate social responsibility of the FDA.

Some of the students who spoke to Modernghana said even though they were scared initially, they realized later on that it was not as painful exercise as they had thought.

“It’s cool just that I was scared when I was asked to lie on the bed. My fears heightened when the medical officer pulled a syringe and was about to insert it in my veins but it turned out to be cool and not that painful”, 17-year old second year student, Richard Ohemeng told our reporter.

Another student, Acheampomaa Grace, underscored the importance of blood donation in saving lives in health facilities and encouraged people to feel free to donate whenever the need arises.

“It was my first time and so I was panicking but I realized that it was not painful so I’ll encourage my fellow students to also come out in their numbers to donate blood”, she added.

The head of the Blood Bank at the Regional Hospital in Sunyani, Abdul Ganiwu, expressed his appreciation to the Food and Drug Authority for collaborating with his outfit to organize the exercise and also thanked teachers and students of the school for their impressive turn-out.

“These blood is not only going to serve the regional hospital…..simply because we sometimes have referral cases coming from peripheral health facilities and so it puts a lot of pressure in terms of demand of blood so this exercise has come at a very good time”, he said.

The Acting Bono Regional Head of the FDA, Akua Amponsah Owusu, in an interview said the blood donation exercise was a nationwide exercise by her outfit as part of their contribution to re-stock various blood banks in the country.

Ms. Amponsah Owusu, who is also responsible for Ahafo and the Bono East regions, was hopeful that the exercise would enable the Regional Hospital in Sunyani to have adequate stock of blood to save lives and also facilitate their operations.