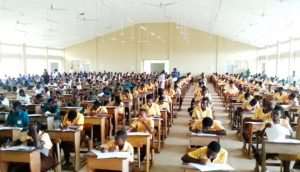 As part of measures to curb malpractices, invigilators and officials who will supervise the exercise have been banned from using mobile phones around the examination centers.

“It is adults who are pushing these little ones to fall into the trap of examination malpractice,” she stated.

She further expressed concern over the fact that there was too much interference by adults in examinations which, she noted, was affecting the performance of candidates.

Mrs Addy-Lamptey said WAEC had also issued stern directives to safeguard the integrity of the BECE.

Under the guidelines, she said, candidates would be thoroughly searched when entering or exiting the examination room.

“Candidates should be seated 30 minutes prior to the start of a paper,” she said, adding that any candidate who reported late for the paper would not be allowed access to the room.

“For the avoidance of doubt, a candidate is deemed to be late when he or she reports after the supervisor has given the order to start work,” she explained.

She added that: “All papers must start and end as the final timetable stipulates. In the event that a paper starts late, the supervisor would have to explain, in writing, the reason(s) for the delay.”

Meanwhile, the Head of public relations at the Ghana Education Service(GES), Cassandra Twum Ampofo, says measures have been put in place to ensure the smooth running of the exam.

“The Ghana Education Service has been working with WAEC and we know that and we've had series of discussions to ensure that everything goes on well. The ban on mobile phones is also one of the measures we have collaboratively put in place.”