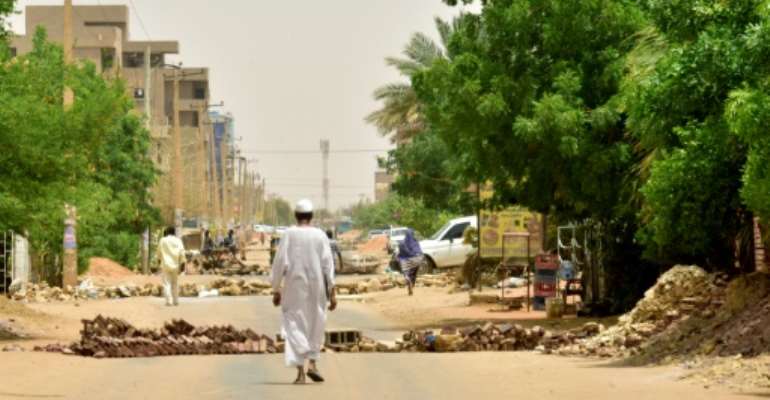 Sudanese residents walk past barricades in Khartoum on June 9, 2019. By - (AFP)

Young Sudanese protesters in T-shirts and jeans dump bricks in a pile to create a makeshift barricade in a Khartoum street -- but they are playing a dangerous game of cat-and-mouse.

They disperse as dozens of riot police storm in on pickup trucks.

Officers in blue fatigues fire gunshots into the air as demonstrators sprint down side-streets in Shambat, a working class northern neighbourhood of the capital.

Security personnel set to clearing the road, first by hand and then with an excavator, setting fire to whatever can be burned, to prevent it being used again.

But shortly after they leave, the demonstrators return to the streets to put the makeshift roadblocks back in place.

The barricades in Sudan's capital have become a symbol of the months-long demonstrations against longtime dictator Omar al-Bashir and the military council that overthrew him in April.

Protest leaders have called for a nationwide campaign of civil disobedience starting Sunday, days after armed men moved into a key protest camp outside army headquarters in central Khartoum, killing dozens of people.

Protest leaders say the wave of repression has left at least 118 people dead and hundreds wounded, mostly during the break-up of the protest camp.

The government says 61 have died.

Security forces make their presence felt along the main avenues in Shambat and the neighbouring district of Bahari, strongholds of the protest movement.

The overwhelming majority of businesses -- banks, pharmacies, restaurants, hairdressers and clothing stores -- are closed, their steel shutters pulled down.

Some are taking part in a general strike, while others have closed out of fear of further violence or the difficulty their staff face in getting to work.

Sudanese protest leaders say 118 people have been killed since June 3. By - (AFP)

Near the centre of Shambat, young protesters try to block the entrance to a side street with everything from stones to tree branches.

"We closed this road overnight," one of them tells AFP.

Security forces came and fired gunshots in the air, he says.

"They opened the way, we closed it again, they opened it, we re-closed it. It was a game of cat and mouse," the 20-year-old mechanical engineering student says.

He insists that the barricades are "nothing personal".

"The main objective is to make sure nobody goes to work," he said. "If we didn't build barricades, people would go on as if nothing had happened."

Behind him, his fellow protesters chanted a key slogan of the protest movement: "power to civilians!"

A white car stops in front of a barricade. The protesters refuse to let it pass, so the driver calmly gets out and continues on foot.

"At the start, this annoyed me. The barricades are a nuisance," he said.

"But I think the young have no other way" of expressing themselves, he said.

An AFP reporter saw one rickshaw driver trying to force his way through a barricade, nearly sparking a fight with a stick-wielding protester.

But other demonstrators held back their comrade. Protest leaders have insisted that the movement must remain peaceful.

The barricades in Sudan's capital have become a symbol of the months-long demonstrations against longtime dictator Omar al-Bashir and the military council that overthrew him in April. By - (AFP)

The powerful deputy head of the ruling military council and commander of the feared Rapid Support Forces, Mohamed Hamdan Dagalo, has warned he will not tolerate "any chaos".

Widely known by his nickname Himeidti, he has urged the public to help security forces pull down the barriers and accuses the protesters of disrupting daily life.

But Fayez Abdallah, joining a long queue at a bakery that is one of the few shops open in Shambat, disagrees.

The government's abrupt decision to triple bread prices was the trigger for the first mass protests that rocked Sudan in December.

"These long queues are not new in Sudan, they date back to the start of the bread crisis which pushed people into the streets," Abdallah said.