Mother, Daughter in the same class graduate from U.S University

A Motivational story from a Somalian Family in U.S
By Theophilus Quaicoe 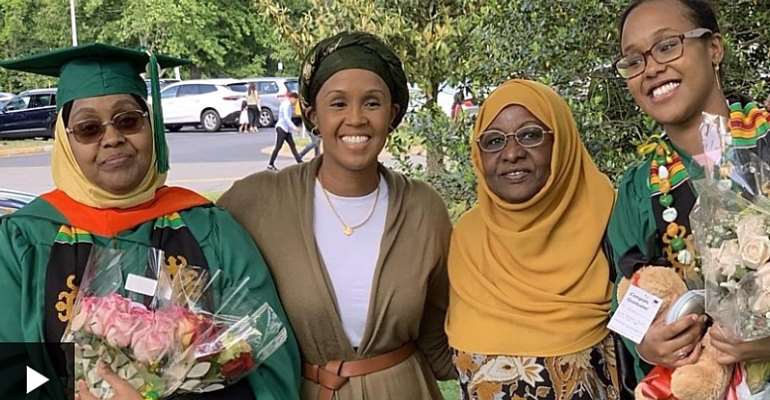 Mother and daughter graduate on the same day from U.S University

Around the globe, it is very rare to see people study in the same class with their parents. While others gladly embrace that exposure, some cultures perceive it as a shameful experience.

However, this lifetime event has been unfolded by a Somalian mother, named Falhad Ahmed Mohamud and her youngest daughter, Amina Mohamed. They both recently graduated with Masters Degrees in IT from a University in Virginia.

Falhad and her daughter told the BBC's Newsday Programme about her intention of going back to school in her 50's, and how she fulfilled the promise she made decades before, BBC News disclosed.

According to BBC news, the family came to the United States as refugees in 1980. Unfortunately, her husband was killed in a fighting encounter on his return to Somalia. After that catastrophic event, Falhad decided to raise and give better education to her two daughters single-handedly.

According to her, when she was leaving Somalia in 1980, she made a promise to her father to go to school and gain a higher education. "But since I came (to the U.S), I had to work to support my daughters in order to get

their education to keep the promise that I could not keep", she said.

Due to that, her daughters made an entrenched decision to do everything they could to get her back to school.

"Amina felt that it's something I wanted in my heart that she said I should have", she sentimentally stipulated.

One day, Amina invited her mother to the bookstore in her school and surprisingly showed her the classes she was going to attend the following week.

"My Mum, as long as I can remember, has been a single parent; mother, and father. She worked so hard to give us everything that we have", Amina narrated to BBC news.

According to Falhad, even though things were very tough for her, she made massive adjustments, and had a motivational tool - which was to prove to her daughters that she was a good student.

"The professors could tell me that I'd been out of school for a long time. However, I think they were pleased to have a person of my age in their class", she disclosed.

She confidently said, " I'm 60. If you have the will to get your education you did not have then go ahead, reach for it!".