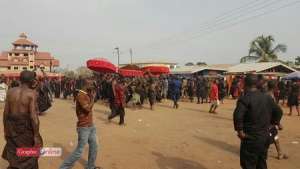 Does it indeed matter most what people sitting on the fence doing nothing will say bitterly and discouragingly about you in the course of your dynamic dedication to be of service to your people, nation and humanity? People who don’t give a hoot about the plight of their Ghanaian, and especially their Kumawuman, compatriots, do not hesitate to exhibit their callousness and exceptional ignorance when passing comments on my relentless efforts and dedication to be of service to my people and country. Some think I am insane. Others think I have nothing more important doing hence spending my precious time writing copiously to challenge, inform, update, and to educate Ghanaians, especially my Kumawuman compatriots on burning issues.

Is Mark Twain always not proven right when he said, "In the beginning of a change the patriot is a scarce man, and brave, and hated and scorned. When his course succeeds, the timid join him, for then it costs nothing to be a patriot". Nobody is mocking you for being a coward. However, do not sit on your backside in your comfort zone doing nothing profitable but to criticise destructively those championing a good cause, as brave and concerned about the general welfare of their people and country as they are.

Having answered my critics who don’t care an iota about the deplorable visitation of harassment, intimidation and daylight robbery on Kumawuman and her sons and daughters, by some traditional overlords, criminals and usurpers of course, I shall proceed to update my concerned Kumawuman compatriots the world over on the ongoing Kumawu chieftaincy dispute.

Very soon, there will be a court trial of the Kumawu chieftaincy dispute. It is known to many that there had already been a series of trials regarding same Kumawu chieftaincy dispute. It came to my noble attention on Friday, 7 June 2019, that allegedly, the money raised from the farmers at Kumawu Sekyere Afram Plains, for the purported final and befitting funeral celebration for the late Kumawuhene Barima Asumadu Sakyi II, is now being diverted to taint the good reputation of the judges that are likely to sit on the case through the greasing of their palms.

I am tempted not to fall for this info being passed to me, hook, line and sinker, although the source of the info has always been credible. Let me give the targeted would-be takers of the intended bribe the benefit of the doubt. Whether they will fall for any such financial inducement with intent to twist justice is their cup of tea. Nonetheless, the memory of their colleagues punished with expulsion and forfeiture of their emoluments for their several years of service to the people of Ghana within the Ghana judicial system following Anas Aremeyaw Anas’ exposé of judicial corruption in Ghana, is too fresh in our minds for any judge worth their salt to dabble in corruption.

As the battle is the Lord’s and with God we are victorious, I am not least perturbed to hear of such impending attempts to induce some people to finally become victims of their own weakness of love of money or corruption. As there is action and reaction, once any such hidden deal becomes public, there will be consequences, thus, a heavy price to pay.

I shall not go any further than to ask all those Kumawuman citizens and their friends worldwide who are wishing to see justice done to Kumawuman citizens and their ancestral place of birth to have faith in God and to do what is required of them. They should not be worried as all attempts to criminally tip the balance in favour of the party able to offer bribe will not survive even if they do materialise as wished by those aiming to influence the arbiters through corruption.

Finally, I end with a quote from Emperor Haile Selassie of Ethiopia who said, "Throughout history, it has been the inaction of those who could have acted; the indifference of those who should have known better; the silence of the voice of justice when it mattered most; that has made it possible for evil to triumph" Will you give evil the chance to triumph by doing nothing, but twirling your fingers criticising and sabotaging those with balls to stand tall to be counted?

The author has 2045 publications published on Modern Ghana.