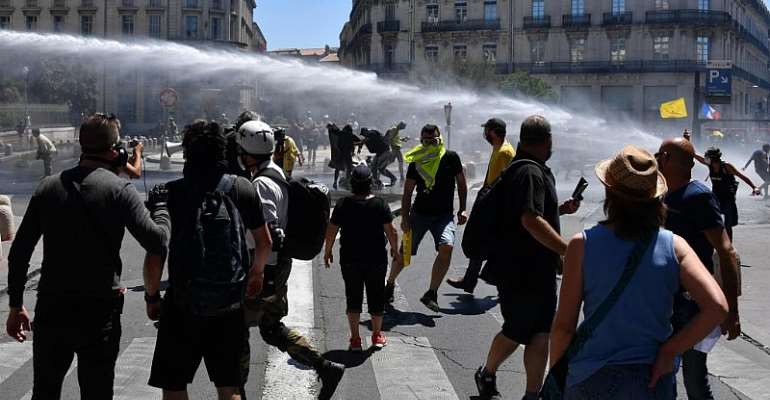 The numbers of demonstrators attending the 'Yellow Vest' anti-government rallies is hovering at close to a thirtieth of its' November-2018 peak of almost 300,000. Around 10,000 across France took part on 8 June, according to figures from the French Interiror Ministry.

Since the European elections at the end of May when the French extreme-right nationalist party, Rassemblement National (National Rally) did better than the President's party, LREM, the anti-government and anti-capital protestors seem less keen to demonstrate in the streets and at roundabouts.

Saturday's official count stands at some 10,300 country-wide with 1,100 in Paris and around the capital in Ile-de-France.

The Yellow Vests who have been publishing their own figures since the start of this year, reckon more than 19,000 of their supporters demonstrated yesterday.

Montpellier, Dijon unrest
The Mediterranean university city Montpellier has often seen trouble during the Yellow Vest marches. Yesterday, clashes were reported with police using tear gas and water canons to disperse at least 2,000 demonstrators as they tried to reach the police headquarters. 10 people were injured.

At the front of the demonstration a banner read, "Resistance! History will show that we are in the right."

The Yellow Vests figures said that 5,000 marched through streets in the city centre where shops and restaurants were open, in spite of police recommendations to close for the day.

Some of the marchers reportedly insulted security guards outside the shops.

Montpellier is known as a bastion of combat for social justice and workers rights.

Police also used tear gas in the city of Dijon in the south-east of France, near Lyon, injuring one person, described as a bystander. A riot-police officer was injured when someone threw a cobblestone at him.

Police said that vandals caused damage in the city centre and 13 people were taken into custody.

Less happening places
Marseille saw around 200 people gather peacefully for their 30th 'Yellow Vest' protest yesterday, according to the police.

North of Paris, 'Yellow Vest' marchers started their protest near the St Denis International Stadium and walked to Bobigny and Drancy, between Paris and Le Bourget airport.

Climate change
The six-month long protest movement that began on 17th November 2018 seems to be on the wane.

Last Saturday, 1 June, 9,500 personnes according to the French Interior Ministry demonstrated, 1,500 of them in Paris.

"We need the hand of God like never before against economy d...
13 minutes ago