Where Are The Vultures? 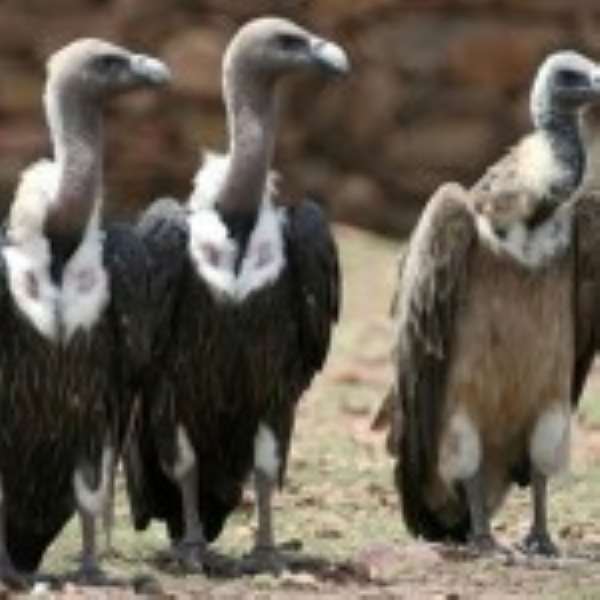 A few years ago, vultures were a common sight in Ghana. They delighted themselves with the business of scavenging. Given that vultures fed on waste (dead animals), they never appealed to the taste of any hunter (not even the famished hunter). Consequently, no hunter will waste his time and energy hunting vultures.

Akan folklore informs as that all the other birds despise the vulture. They spitefully and condescendingly treat the vulture and establish no friendly relations with him. They consider the vulture as a fool and dimwit. The vulture also thinks he is unique. He moves along with other scavengers. He also thinks of himself as environmental police, because, unlike the other birds, he avoided sharing the same food with human beings. He never suffered from any malicious catapult!

In Akan philosophy, the vulture is a symbol of longevity, humility, and unassuming figure. There is an Akan proverb that 'the vulture prolongs his lifespan on the basis of his perceived foolishness (eating on the rubbish dump).

This proverb is often invoked to counsel individuals not to be self-conceited, egoistic, or wise in their own eyes. The Bible reflects this that we should not think highly of ourselves (Romans 12:3). Sometimes, you just have to play the role of a fool to win a case. There are times we have to let go of our rights for a greater good.

In His Sermon on the Mount, recorded in Matthew chapters 5-7, Jesus taught about why we should not insist on our rights all the time. He said that there are times we have to take the position of weakness. For example, he says that do not argue with your adversary who is more powerful than you and can truncate your life if you enter into litigation with him (Matthew 5:25).

In our ecosystem, the vulture is a 'Town Council'. He cleans the environment and ensures that deadly things leave the environment. The Ultimate Reality deposited in the genes of vultures to ensure a sound ecosystem.

Indeed, everything found in creation has a function to ensure cosmic balance.

Sadly, for some years now, l have not been seeing vultures around in Accra. It is not that we no longer have open heaps of rubbish as it is about a new kind of spirituality that is feeding an indigenous spiritual map.

About a week ago, a huge hen was hit to death by (I guess) a trotro driver in my community. As a gated community, no one sees it as his or her duty to clear the untarred road of the carcass of the hen. Indeed, this is against the backdrop that the carcass lay very close to a small mosque. But, like no one's business, we all keep circumambulating the carcass. That it has been raining has also delayed a total decomposition of the carcass.

Today, at the Legon Seventh-day Church, l met my brother in the Lord, Uriah Karikari, who is also an entomologist. In our conversation, we drifted into talking about vultures. Quickly, l realized that vultures are running into extinction in Ghana.

The extinction of vultures is not because they have suffered a challenge with their deoxyribonucleic acid (DNA). As l said, it is also not because there is no open garbage around. It is rather because there is a new form of spirituality that encourages the hunting of vultures for the purposes of destruction. Vultures are seen as the transmogrification of witches and wizards. It is believed that vultures are the embodiment and the habitation of demonic spirits.

When l was young the demonized bird was the owl. I still remember that there was a huge tree at the edge of Montreal Park (where the biggest mosque in Accra is currently located), Maamobi. As children, we were cautioned not to go near that tree because it housed owls that were responsible for causing convulsion among children.

The associated of evil with owls is shared by many African cultures.

There was a Mallam (Mualim, but with spiritual insight), who specialized in resuscitating children who suffered convulsion. I personally suffered convulsion in 1987 and had to be treated by this Mallam. Indeed, following the implementation of the Bretton Woods’ economic reforms, known popularly as Structural Adjustment Programs in Ghana (and other so-called Third World countries), the government removed subsidies on health. This birthed the cash-and-carry policy that made it difficult for peasants to seek medication at the hospital. This explained the ubiquity of mallams as healers and spiritual counselors.

There were many myths that that tree had defied all attempts to fell it. Eventually, some gentlemen decided to burn lorry tires at the base of the tree to produce 'wele' also known as 'ganda' in Zongo Hausa. As children, we would go to the forbidden tree in search of leftover 'wele'. Could it be that many of us children suffered convulsion because we threw caution to the winds to search for 'wele'? Or was the convulsion as a result of excessive tropical heat?

Anyhow, after many attempts, the tree was felled and we never had 'wele' or saw owls. Vultures have suffered the same fate as the owls. The spiritual map of Ghana is filled by men and women who have demonized old women, the impoverished, and now vultures. The vultures are all gone (at least in many areas in Accra). There is no functional differential to vultures. Consequently, Accra's filth is getting out of control. Flooding has become our lot. Unfortunately, the men and women in the spiritual business are not teaching good environmental practices.