Gonjaboy Is The Most Influential Student In The Nation's Premier University 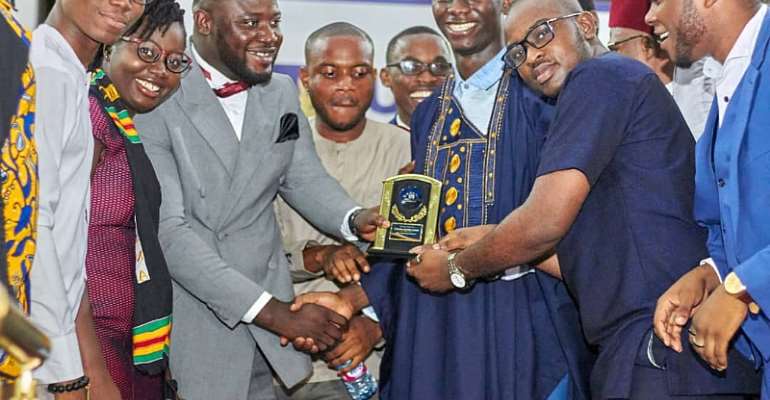 A recognition such as the Most Influential Student in the University of Ghana does not just require someone who holds public office and is widely known but also someone whose deeds demonstrate his character and speaks volumes for him even in his absence. Someone who has proven beyond reasonable doubt that indeed he is on a path to change the world and making that evident in his day to day dealings within his immediate community.

At the just ended University of Ghana SRC Excellence Awards saw Master Ewura Adams Karim affectionately called the SANKOFA COMMANDANT recognized as the Most Influential Student and his team Green Growth that represented the University at the regionals of the Hult Prize competition in Boston, USA also awarded the Student Innovation award for the year 2019.

He is a self-motivated and multi-talented young man with a history of demonstrated leadership in youth and community development, entrepreneurship and philanthropy. He is a performing artist, social entrepreneur, an activist and one who is passionate about positive change. Though born and bred in Ghana, he has a Global mentality grounded in Pan- Africanism. He studies Theatre Arts at the University of Ghana with focus on community theatre and theatre for development.

He hails from Salaga in the East Gonja Municipality in the Savannah Region of Ghana. He had his basic education at Miracle International School and later moved to Dahin Sheli School both located in Tamale. He later moved to have his senior high school education in Kumasi at the T. I. Ahmadiyya Senior High School where he studied General Arts.

While in T. I. Amass, he became the protocol prefect and eventually rose to become the Vice President of the Ashanti Regional Students’ Representative Council. After his tenure of office as Vice President he was recognized as the Most hardworking Executive as well as Outstanding Regional Executive.

Ewura found his love for debate and through that he led the school’s debate team to win several debate contests both within the Ashanti Region and outside the region. He represented the school at the AU @ 50 intra/inter school dialogue league and he also placed 2ndat the 2015 National Independence debate competition.

He loves to listen to music, write poetry, acting and swimming.

He is passionate about the development of youth and women in Ghana. He co-founded Maltiti Foundation, a non-profit NGO with the aim of empowering women and youth is deprived communities in Northern Ghana. He also Co-foundered Vert Growth an Agri-business that seeks to create employment for disconnected youth in Ghana and he is currently the CEO of Creativity Express, an art firm that uses art to promote social change. These enterprises focus on developing and empowering young people in Ghana by creating different opportunities for young people to develop themselves.

He is a one-time SRC Presidential candidate of the University of Ghana and he presently serves as the Chairperson of the University of Ghana Students Representative Council General Assembly which is the legislative arm of the SRC. As part of his mandate is to preside over sittings of the General assembly as well as play an oversight responsibility of keeping activities of executives in check with the help of the membership of the General Assembly. This he has done with utmost professionalism since assumption of office.

Ewura Adams Karim has demonstrated his uniqueness time and again through his versatility, aura, awesome and inspiring leadership prowess not just in the University of Ghana but also across the country and the continent. He has caused massive change in the lives of numerous people who look up to him directly as a role model and a youth leading an exemplary cause.

Ewura Adams Karim has granted several radio and television interviews to speak on topical issues bothering students and youth in the country. He has represented the University of Ghana at the Regionals of the Hult Prize Competition on two occasions, in Dubai in 2017 and in Boston in 2019. He was recently recognized as a Community Hero by Africa Centre for Peace Building and Awake Africa Magazine. The Greater Accra Regional National Service Secretariat also recognized him as one of the youths who has played a role in the alleviation of suicide in our Ghanaian society through the Choose life initiative. He has also walked away with the Most Outstanding Student Award in Dr Hilla Limann Hall for two consecutive years, 2018 and 2019.

Ewura and a lot of Ghanaian youth across the country and the globe give us hope that indeed there is a brighter future for Ghana and the African continent and we have no doubt whatsoever that they will deliver when the time comes for them to pay their dues to the nation.