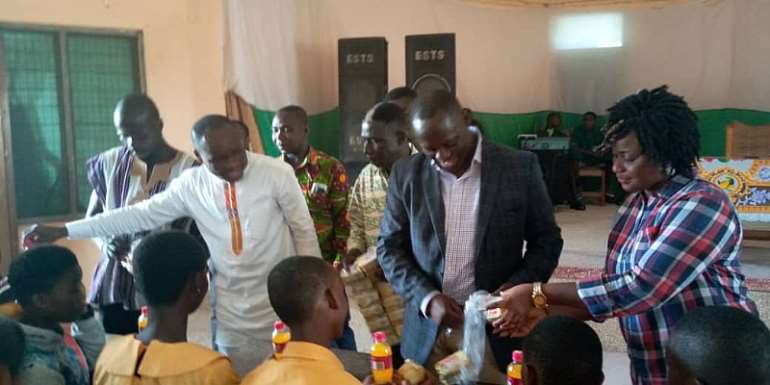 Leaders from the two largest political parties, National Democratic Congress (NDC) and the New Patriotic Party (NPP) in Ellembelle have joined forces in a show of support for final year Junior High School (JHS) pupils ahead of this year's Basic Education Certificate Examination (BECE) which is scheduled to start on Monday June 10.

Addressing candidates in Nkrofol, the Member of Parliament for the constituency, Emmanuel Armah Kofi Buah said the leadership of the two parties prioritise the future of children over personal and political rivalry, thus their decision to unite for the progress of school pupils in the district.

He, therefore, urged the candidates to approach the examination with confidence and a positive mindset that success is achievable.

The former Minister for Energy and Petroleum, who had joined his political rival, and current District Chief Executive (DCE) for Ellembelle, Kwasi Bonzo to present snacks and mathematical sets to candidates also assured the candidates of his continuous support.

For his part, the District Chief Executive (DCE), Kwasi Bonzo, called on the candidates to aspire to be great men and women in the future by avoiding cheating and other forms of examination malpractices.

According to the District Director for Education in Ellembelle, Blay Ackah Quaison, 1,865 registered pupils from the district will join over 500,000 candidates from other parts of the country to write the examination which is a requirement for entry into second cycle institutions in Ghana.