Parliament To Check Abuses In Churches, Not Spiritual Matters —Dafeamekpor 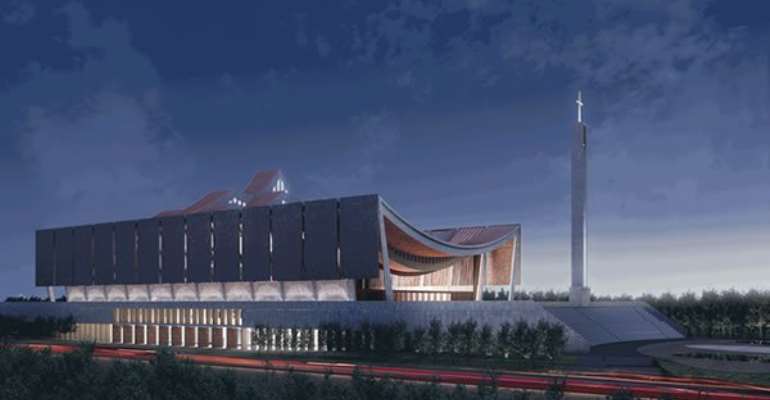 A file photo of the National Cathedral

According to a Member of the Constitutional, Legal and Parliamentary Affairs committee in Parliament, Rockson Dafeamekpor, when MP for Mfantseman, Ekow Hayford, suggested a bi-partisan committee to investigate excesses of some churches, he was merely re-echoing the views of the majority of Ghanaians.

In the view of Dafeamekpor, it was the interest generated by the subject, which informed the speaker’s decision to refer the matter to House’s constitutional committee.

He was quick to add that what the House is seeking to do is not to legislate against spiritual matters.

Rather the Parliament is determined to curb Human Right abuses and constitutional infractions committed against innocent Ghanaians under the guise of religion.

This will not just be a question only for churches to answer but all faith practitioners, he averred.

“We are looking at all manner of spiritual activities,” he said

Article 21/1 (C) of the 1992 Constitution of Ghana says: “all persons shall have the - freedom to practice any religion and to manifest such practice.

Also, Article 26/1 says “every person is entitled to enjoy, practice, profess, maintain and promote any culture, language, tradition or religion subject to the provisions of this Constitution.”

The law also provides that the enjoyment of such rights must not infringe on the freedoms of others.

Supporting the views of Defeamekpor, Martin Kpebu, a private legal practitioner who shared the panel with him said regulating religious activities is long overdue despite the existing constitutional injunctions.

“We are not saying the government should take over churches. But we have reached a stage where we need to control those who are not doing things well.”

While he concedes that purported illegalities being reported of churches is taken care of by existing legislation, he argued that having regulatory agency manned by religiously inclined persons will facilitate the process of abating the menace.

It will be cheaper to use regulatory organisations to deal with it. The regulator will have a monitoring team. They will deal with the excesses that the citizens are not willing to report, Kpebu stressed.

Meanwhile, Dafeamekpor has revealed that three umbrella church organisations, including the Christian Council, have met the leadership of Parliament on the development on Friday.

According to him, the “Church leadership conceded that what is happening in the name of faith is not good.”

While Parliament urged the leadership of the church to judge themselves so that nobody judges them, they also asked them to submit a memorandum on their concerns.

The issue so far

On Wednesday it was MP for Mfantseman, Ekow Hayford, who first brought up the subject of regulating churches.

In doing so, Hayford also appealed to the media to sieve the content they put out. He said media houses should be circumspect about the ‘Men of God’ they offer their platform to.

The public, he said, should “also be vigilant and cautious in identifying which religious group and churches they associate with.”

He bemoaned how some pastors lure their unsuspecting members to purchase bottles of water for up to â‚µ2000.

These same people cannot afford just a fraction of that money to go to the hospital, he said.

On his part, the General Secretary of the Christian Council, Rev. Cyril Fayose said legislation will not solve the problem.

“They should hasten slowly. We do realise the situation that is confronting us and we are equally concerned and we are also looking for ways to address the issue but I don’t think legislation will solve the problem.

“It is a more complex problem than it looks and the Christian Council is working very hard so that we can come together as Christian leaders to do something about it but eventually we will need the State to give us legislative backing. They should give us some time to work on the problem and then we will back to them for legislative backing,” he added.

One MP who is against the call for legislation is Samuel George.

The Ningo-Prampram MP said legislation and logic cannot be used to regulate things that challenge logic, “things that have to do with faith defy logic, which is why they are faith.”

In his view, any legislation on churches, questions the legitimacy of miracles and he as a man of faith, stands strongly against it.

“I am not by any means saying that we don’t have charlatans who have become men of God, I’m not disputing that but that is a small number.

“You cannot over generalise the situation so it is unfair to say that all men of God need to be regulated,” he added.

Some MMDCEs will be approved in December because of controve...
17 minutes ago