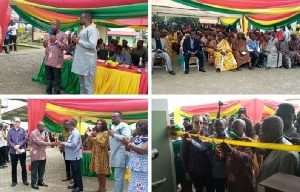 The Akufo-Addo government on Friday commissioned an ultra-modern polyclinic for the Oduman community of the Ga West Municipal Assembly to offer comprehensive and better healthcare services for members.

Mr. Kwaku Agyeman Manu, the Minister of Health, who commissioned the facility together with other government officials, said government constructed the facility to take health care to the doorstep of every citizen to avoid obstacles people had to go through to access basic healthcare.

He said it was also for Ghana to contribute its quota towards the achievement of universal health coverage across the globe.

The commissioning of the new polyclinic, he said, was also to reduce the pressure being put on the tertiary health facilities including the Korle-Bu Teaching and Greater Accra Regional Hospitals.

Mr Agyeman Manu said even though a pregnant woman was supposed to visit the health facility for check up and monitoring at least four times before delivery, yet, some of them visited just once.

This, he said, sometimes made it difficult for health personnel to save them from some complications before, during and after delivery and encouraged them to adopt the habit of visiting health facilities not only when they were sick.

The Minister advised the youth to desist from drug abuse and alcoholism adding that: “There are some diseases that don't come to you but your lifestyle such as smoking and drinking invites them. When you smoke too much, you will get many diseases that you may never know until you are dying.”