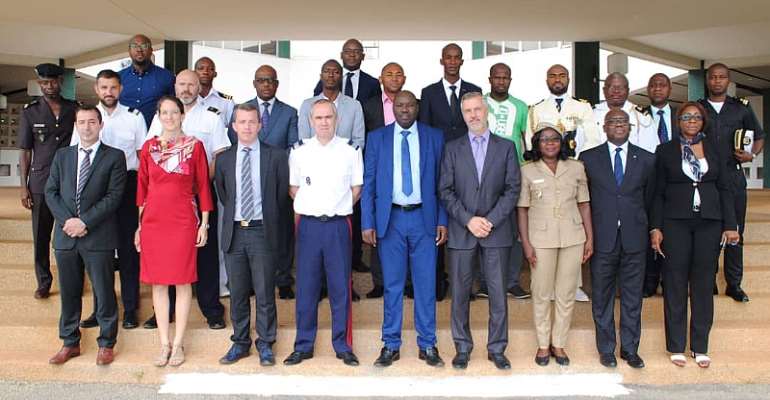 Atleast 20 police, custom and navy officers from 13 West African countries have deepened their capacity in ship targeting and control to tackle trafficking on the sea.

The Interregional Institute of Maritime Security (ISMI) has taken steps to increase African countries effort in broadening intervention and safety controls on ships.

ISMI with funding support from France has trained people who matter in the maritime industry from 20th to 24th May, 2019 at the Regional Academy of Marine Sciences and Techniques (ARSTM) in Yopougon, Abidjan.

The 5-day training, organized in collaboration with the post of Regional Customs Officer in Dakar, is supported by the Republic of Côte d'Ivoire and the Directorate of Security and Defence Cooperation (DCSD).

Practical sessions on board commercial vessels were conducted with the assistance of the African Express Line and IRES shipowners and the P&I marine insurer.

The training, which is the first-level training course followed by in-depth training in ship search offered participants the enormous skills and techniques to do their work diligently.

The officers were able to practice during the sessions: targeting a ship from the documents and plans onboard, safety palpation and handcuffing exercises, tracking hiding places on board a commercial ship.

Speaking at the opening ceremony, the Regional Coordinator of the Action of the State of the Sea, Guillaume de Beauregard said maritime transport remains the most economical means used by international trade to transport goods and merchandise on all continents, hence the multiplicity of ships on the seas.

According to him, more than 80% of the world's goods are transported by sea and UNCTAD forecasts that the total volume of maritime trade will increase by 3.8% per year until 2023.

He noted that based on the above statistics, it was important to start processes to build the capacities of our maritime officers which underscored the need for this workshop.

Highlighting the complex nature of the work area, he added that, there are several ways by which a ship can be explored considering the danger to human life particularly, going down into a ballast tank, for example, can be a trap.

Guillaume de Beauregard indicated that searching a container and a ship are two very different activities adding that, ship searches cannot be compromised.

“A ship is full of corners and recesses, most of which are potential hiding places. To effectively conduct a ship search, method and technique must meet here. This is precisely the objective of the training: acquiring the basic and essential technical know-how that will enable participants to carry out useful investigations on board,” he emphasized.

The Director of ISMI, Commander Ake Lazare stressed that the seminar aims at building the capacities of the structures and services in charge of collecting, analyzing and processing intelligence for the targeting and neutralization of high-risk vessels.

The Regional Customs attaché for West and Central Africa, Michel Gindroz, acknowledged that the fight against trafficking by sea concerns all countries.

"All countries are confronted with this reality. All governments must take measures to protect their land or maritime borders and to ensure the security of States and citizens,” he intimated.