Fulfill Protein Requirement For Children By Comprehensive Means, Not Favoritism 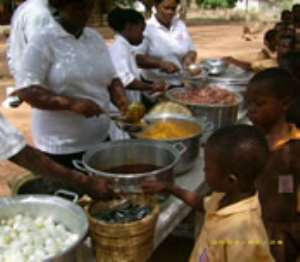 Tamale, Ghana – Managing Director of Alafei Foods, Claude Convisser, today denounced as inadequate and ethically questionable a training initiative announced on May 29 by the Acting National Coordinator of the Ghana School Feeding Programme intended to solve protein deficiency in schoolchildren’s lunch caused by the Government’s ban on fishing.

The fishing ban is leaving caterers with a shortage of anchovies that they are supposed to add as a protein supplement for schoolchildren’s lunch meal.

Alafei Foods submitted a proposal in March 2018 to deliver to primary schools with 150,000 children enrolled in the north of Ghana its low cost, high-protein vegetable sauce containing Textured Soya Protein to be manufactured at its industrial site in Yendi. Convisser said: “Accepting Alafei Foods as a partner will permit the Government to guarantee that every school child will receive between half and all of his or her daily protein requirement. The only way we can make this guarantee at low cost is by volume, if we are able to deliver to every primary school and every primary schoolchild in our catchment area.”

Alafei Foods’ proposal to deliver its higher-protein vegetable sauce by truck is not only comprehensive, it will reward remote farmers with the opportunity to ship their produce to more lucrative regional markets on the return leg of the delivery truck.

Convisser questioned why Dr. Quashigah had rushed to promote Yedent’s product, when she told him and two colleagues from Alafei Foods in a meeting on May 7 that the programme still needed more time to study Alafei Foods’ proposal originally submitted 15 months ago.

The Programme’s Operations Manager Madame Doris reportedly declared that she has a “classified and confidential, private arrangement” to promote Yedent, which the Minister for Gender, Children and Social Protection Cynthia Mamie Morrison later told the Alafei Foods representatives would be inappropriate and could not possibly be true.

Alafei Foods has the unanimous endorsement of the Yendi Municipal Assembly for funding under the Government’s One District, One Factory Programme.

It has asked the Minister for a letter of intent accepting its proposal, thereby enabling the Company to secure Ghc 156 million in private funding to move “Ghana Beyond Aid” by establishing operations in the north and serving schoolchildren its high protein vegetable sauce.