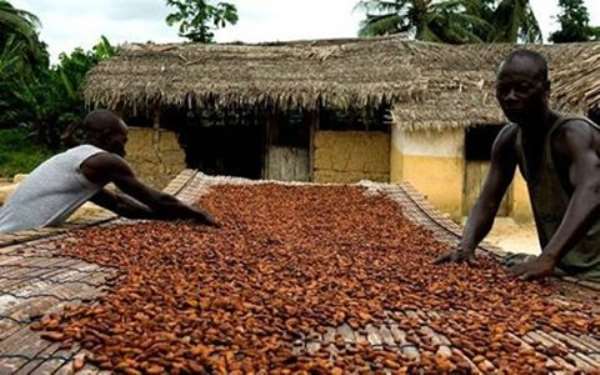 Cocoa farmers have called on government to increase producer prices of cocoa by October 2019 arguing that the producer price of cocoa was inadequate and had worsened their economic welfare.

This was contained in a research report: ‘Assessing Farm Gate Pricing and Income of Cocoa Farmers,’ launched in Accra yesterday and is aimed at identifying key players in the cocoa industry who are involved in the determination and setting of cocoa producer prices.

The report, which was initiated by SEND GHANA in partnership with INKOTA netzwerk, a German NGO and Rainforest Alliance, Ghana, covered 90 farmers with 220 farmlands in the Agona East District in the Central Region.

The lead researcher, Professor Kwabena Asomanin Anaman, who presented the report, said cocoa producer price had not been increased since October 2016.

He stated that the majority of the cocoa farmers indicated that their economic welfare had substantially worsened as a result of unchanged local producer price for 2017 and 2018 production years respectively.

Professor Anaman noted that off-farm income activities by cocoa farmers yielded an average annual income of about â‚µ 1,165 compared to the average annual gross income from cocoa farming of GH â‚µ 3,493 and GH â‚µ 982 for non-agricultural and forestry ventures.

“Off-farm income constituted about one-third of total gross cocoa income and therefore was an important risk management strategy for cocoa farmers providing an additional source of livelihood income,” he added.

According to the lead researcher, the findings further revealed that farmers who owned and directly managed their cocoa farms tend to undertake less income diversification activities and focused more on the management of their cocoa.

To address these, he stressed the need for COCOBOD to strengthen its public education on the processes involved in the determination of local producer prices.

“This public education could involve more meetings with farmers through their district and regional representatives over a period of time before the announcement of official local cocoa prices during the first week of October each year,” Professor Anaman noted.

He added that it was important for COCOBOD and its related agencies to ensure equitable distribution of resources and services for all cocoa farmers.

The Country Director of SEND GHANA, George Osei-Akoto Baffour, stated that price determination mechanism which involved cocoa farmers would enable them to influence the process and help them get enough resources in terms of income generated out of their cocoa production.

I’m worried Central Region is allowing other regions to over...
12 minutes ago