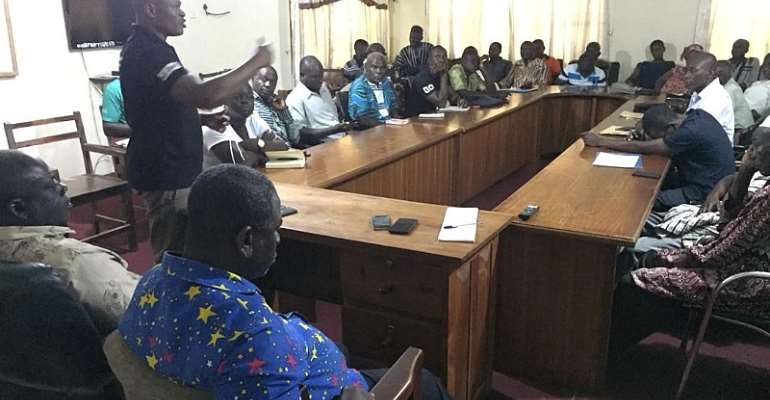 MR. DELA NEWMAN (STANDING) STRESSING A POINT AT THE MEETING

Welcoming participants to the meeting, the Atebubu-Amantin Municipal Director of Agriculture, Mr. George Amanyo said the meeting was for the Regional Director to have first-hand information on the activities and challenges facing the various groups under the German Technical Cooperation GIZ-Market Oriented Agriculture Production Programme.

The Municipal Chief Farmer Mr. Amadu Kwasi Addo said activities of Fulani herdsmen remain a very serious worry to farmers whiles the lack of standardized measurements for produce like rice and maize has proven inimical to their well-being.

He also touched on the annual glut in the production of watermelons and garden eggs which are produced on a massive scale in the municipality which results in low prices to the detriment of farmers.

Responding to issues raised by the various groups, Mr. Donkor urged farmers to form groups in order to have a united front and as such a better bargaining power in their dealings with buyers.

He said if neighbouring Ejura-Sekyidumase has been able to institute measures to enable their farmers obtain good deals from buyers then the same can be replicated in the Atebubu-Amantin municipality.

Although Mr Donkor conceded that chemicals for the control of the Bacteria Black Spot mango disease are expensive, maintaining that their application ensures good yields which turn out to be profitable ultimately.

He urged chilli pepper farmers to continue to adopt green label practices which involve the use of only organic materials like animal dropping for cultivation adding that this will guarantee them ready markets for their produce.

The regional director averred that government under the ‘one district one factory’ initiative is increasing the production capacity of Mr. E.K AGYEI a pepper processor at Abesim in the Bono region saying this represents a big boost for the chilli pepper market.

He announced that the municipal will benefit from one of the ten proposed Agriculture Mechanization Service Centers AMSEC earmarked for the earths while Brong Ahafo region.