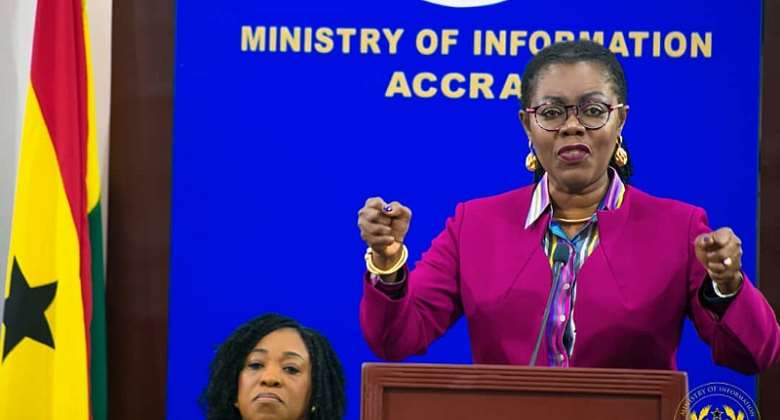 She said the unfortunate comment by the former minister was evidence of ‘armchair feminism’.

She was reacting to criticisms against President Nana Akufo-Addo over his recent comments on giving more opportunities to women in Ghana and the need for more gender dynamism.

Contributing to a recent panel discussion at Women Deliver Global Conference 2019 held in Vancouver, Canada, President Akufo-Addo had suggested that women needed empowerment to be able to make decisions.

However, 30-year-old Arab feminist, Alaa Murabit, disagreed with Mr. Akufo-Addo, saying that a lot of women are already empowered but have been suppressed by systematic structures that closes doors to women.

According to her, “it is incredibly important to recognize that there are dynamic incredible women that the door remains closed to.”

But responding to her claim, President Akufo-Addo noted that “what you are saying will not open doors.”

The President was insistent that more and more women should be empowered to rise to the level where they can be able to make decisions about their societies, nations and the world in general just as their male counterparts.

However, some persons have been trying hard to question the President’s commitment to women and his understanding of women’s issues or welfare.

But addressing the media on Friday, June 7, 2019 at the Information Ministry in Accra, Mrs. Owusu-Ekuful cautioned that “instead of challenging him (Akufo-Addo) we should be waking up from our slumbers.”

She wondered why some women activists in Ghana are only concerned about writing on social media about gender issues and not encouraging women to take up leadership roles.

Mrs. Owusu-Ekuful could not fathom how Mrs. Lithur for instance was quiet on women issues throughout the eight years of the National Democratic Congress’s administration but has suddenly found her voice.

She recounted how Oye Lithur and other women activists in the NDC who are criticising the President today were the same people who signed a petition for the Montie 3 who insulted and threatened then Chief Justice, Georgina Wood, to be released from prison.

According to her, it was about time women used their numbers to push their agenda.

She explained that majority of the people criticising the President do not seem to understand gender issues.

Mrs. Owusu-Ekuful said “some who are criticising him (Akufo-Addo) do not know anything about gender activism.”

She explained that the President’s call for dynamism in women’s advocacy would reignite “the dead women’s movement in Ghana.”

According to her, “the women’s movement in Ghana is dead.”

She stated that Ghanaian women ought to compete for political offices and should get encouragement from one another, “it is not just talk, it is action that is needed.”

Minister for Foreign Affairs and Regional Integration, Shirley Ayorkor Botchwey, said “feminism is not about being overbearing and abusive.”

She stated that all the policies and laws can be made but if women do not come out in their numbers to compete for leadership roles, “unfortunately, we will not get anywhere.”

According to her, what President Akufo-Addo said “was the truth.

Unfortunately, we are all playing politics with it.”

She said the President was speaking in the context of Africa and Ghana and that his statements were call to action, saying that “if we do not act, government will put in all the laws and nothing will change.”

The Foreign Minister urged persons who said they were crying because of what the President has said, to face reality and stop crying.

” So for those who are crying, stop crying and get to work”.

Responding to claims by Ms. Murabit that doors are not opened to women, Minister for Local Government and Rural Development, Hajia Alima Mahama, said young girls and women should not sit down and wait for doors to be opened for them.

She said they should rise up and open doors for themselves.