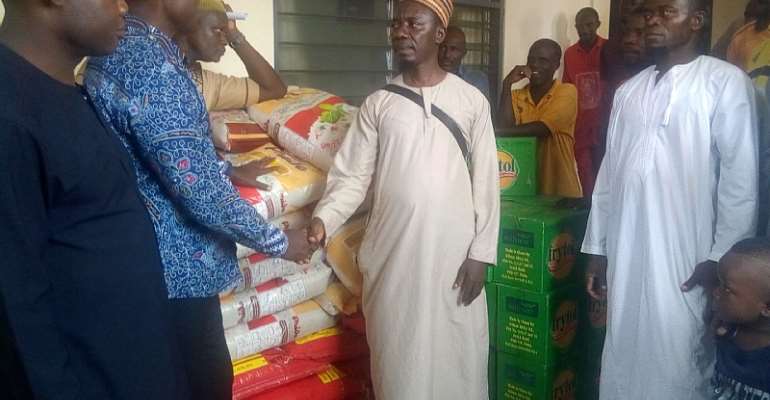 District Chief Executive for Gomoa Central, Hon. Benjamin Kojo Otoo has hailed Muslim Communities in the District for the Peaceful manner they have been celebrating Eid-ul Fitr and other festivities in the district.

" Muslim Communities in Gomoa Central has been very disciplined when it comes to celebration of festivals under the Islamic calendar.

Unlike other places where the people especially the boys ride motobikes at top speed Making all kinds of noise tarnishing the image of Islamic Religion.

The Gomoa Central DCE stated these when he on behalf of the Assembly presented 91 assorted bags of rice and 30 flytol cooking oil to Muslim Communities in the district to mark their annual Eid-ul Fitr Festival at Gomoa Afransi.

He also expressed his happiness about the the cordial relationship that has existed between Muslim and other religious bodies in the Gomoa Central District.

" On behalf of the Member of Parliament for Gomoa Central, Hon. Naana Eyiah who is the Deputy Minister for Lands and Natural Resources, we wish to extend our warm greetings and congratulations message to our Moslem brothers and sisters in Gomoa Central and beyond.

It's not for nothing that His Excellency Nana Addo Dankwa Akufo Addo led NPP government established the Zongo Development Fund.

It is to ensure infrastructure development in the Muslim Communities. Those of us in Gomoa Central District will also benefit from the fund.

He noted that Muslim Communities in the district will continue to pray for Peaceful coexistence with the other religious beliefs adding the need for the people to live in peaceful manner.

Alhaji Baba Adam Musah is also NPP Nasara Coordinator for Gomoa Central Constituency was extremely grateful to the Gomoa Central District Assembly for spearheading infrastructure development in the District observing that it's gradually improving the lives of the people.

Alhaji Baba Adam Musah disclosed that Gomoa Central District has 19 Muslim Communities who are contributing their quota towards economic growth and development.

He noted that the items would be distributed equally among the people to serve the purpose.

He visited Gomoa Mangoase, Bisease, Aboso and Gyaman where he called on parents to take advantage of Government's Programmes and policies like Free Education, Planting for Food and Jobs, Rearing for Export and others to better their lives.