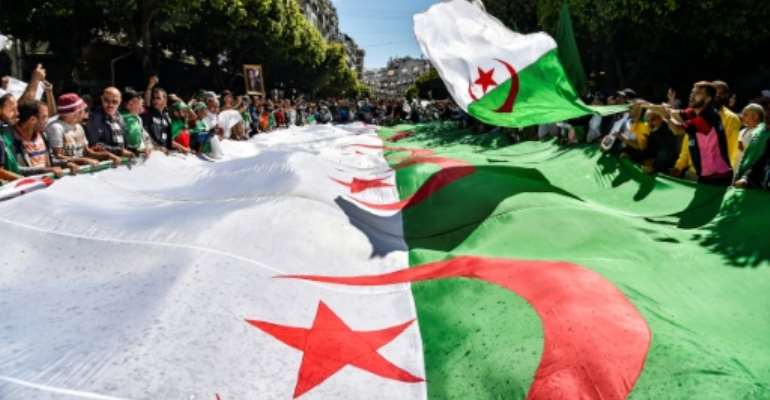 Algerians have kept up mass protests as they push for broader changes after the resignation of leader Abdelaziz Bouteflika. By RYAD KRAMDI (AFP)

Interim Algerian president Abdelkader Bensalah on Thursday called for "dialogue" after the authorities ruled out holding a planned election on July 4.

Bensalah urged the political class and civil society in the North African country to hold an "inclusive dialogue" aimed at fixing a new date for elections "as soon as possible" in a televised address.

Algeria's constitutional council said Sunday it was impossible to stage the poll to choose a successor to ousted president Abdelaziz Bouteflika early next month, after the only two candidates were rejected.

The move comes after weeks of demonstrations intented to pressure political leaders into postponing the vote.

Bensalah, the former upper house speaker, was appointed on April 9 under constitutional rules which deem a presidential election must then be held within 90 days.

With that deadline certain to be missed, the constitutional council has suggested his mandate be extended.

The planned vote had drawn widespread protests, with Algerian demonstrators demanding Bouteflika allies step aside to make way for a broader political overhaul before any elections are held.

Army chief Ahmed Gaid Salah has emerged as a key powerbroker since Bouteflika stepped down on April 2 in the face of mass protests against his bid for a fifth term.

Gaid Salah had been an ally of the ailing president, but as pressure from demonstrators mounted he ultimately called for the long-time leader's impeachment.

Protesters have since called for Gaid Salah to step down, along with other top figures they argue are tainted by their allegiance to Bouteflika during his 20-year rule.

While Gaid Salah had pushed for polls, July 4 looked increasingly implausible as no major party nominated a candidate.

A major obstacle emerged when some mayors and magistrates said they would not take part in organising the polls.

The two unknown figures who put themselves forward -- Abdelhakim Hamadi and Hamid Touahri -- had not been expected to gather the necessary 60,000 voter signatures to validate their bid for office.