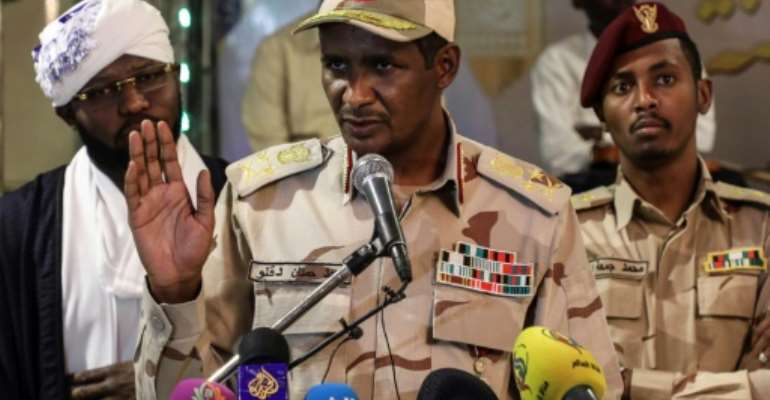 Lieutenant General Mohamed Hamdan Dagalo has gone from a militia chief in Sudan's war-torn Darfur to the country's second-in-command, in charge of a paramilitary force accused of gunning down protesters in Khartoum.

When security personnel attacked demonstrators camped out in the heart of the capital on Monday it was his powerful Rapid Support Forces (RSF) that witnesses said were at the forefront of the bloodshed.

A doctors committee backing the protests has put the death toll from the ferocious crackdown at 108, while the government has said 61 people died across the country.

Dressed in desert fatigues, the tall and slightly stooped Dagalo -- widely known by his nickname Himeidti -- has become a regular fixture on television since Sudan's military ousted veteran leader Omar al-Bashir on April 11.

Sworn in as the deputy head of the military council that took power, he at first positioned himself on the side of the demonstrators who helped end Bashir's 30-year rule.

But as his heavily-armed men have fanned out across Khartoum, Dagalo has struck a more hardline tone and on Wednesday he insisted "will not allow chaos".

"Although he's not educated, in his interactions he comes across as extremely street-smart and somebody who's in charge of the situation," said a European diplomat who met him shortly after Bashir was toppled.

Dagalo's power and the force he commands have their roots in the infamous Janjaweed militias accused of horrific abuses in Darfur.

A camel and sheep trader with little formal education, his rise began when the authorities started training and arming nomadic Arab raiders to counter an ethnic minority rebellion that broke out in 2003.

The groups -- known as Janjaweed -- were sent to attack villages on camel and horseback as part of a campaign of terror that saw Bashir indicted for war crimes, crimes against humanity and genocide by the International Criminal Court.

Dagalo was in charge of one of the militias that operated in the chaos of the Darfur conflict -- even announcing in 2008 that he was starting his own rebellion against Khartoum.

Filmed deep in the bush in Darfur, with his face partially concealed, Dagalo denied his troops had been involved in abuses and claimed his Darfur Arab peoples were the victims of marginalisation.

But he soon reconciled with Khartoum and by 2013 he was appointed commander of a new force made up of former, mostly Arab, militiamen as Khartoum once again sought to crush the insurgency -— the RSF.

"It seems Bashir increasingly distrusted the regular army and the intelligence service... and thus empowered the RSF as a praetorian guard and third pole of power," said Sudan expert Jerome Tubiana.

The RSF won a number of victories against rebels in 2014 and 2015, but were accused by Amnesty International of extrajudicial killings and rapes.

Dagalo denied the charges, and invited journalists to see his troops display dozens of vehicles and weapons captured from the Rebel Justice and Equality Movement in a major 2015 victory.

His forces were also deployed to fight other insurgencies in South Kordofan and Blue Nile states.

When Sudan joined the Saudi-led coalition in Yemen in 2015, the RSF were deployed there, a major boon for Dagalo and now-head of the military council Abdel Fattah al-Burhan.

"It allowed him, alongside al-Burhan, to meet United Arab Emirates officials and Saudi officials and present themselves as possible successors of Bashir,' Tubiana said.

When the military ousted Bashir, Dagalo became the second most powerful man in the country.

But that may not be the extent of his aims.

Sources say he has set his eyes high and is looking ahead to what will come after the country's political transition.

"He is highly politically ambitious. One has to watch and wait how his ambitions unfold," a western diplomat said.