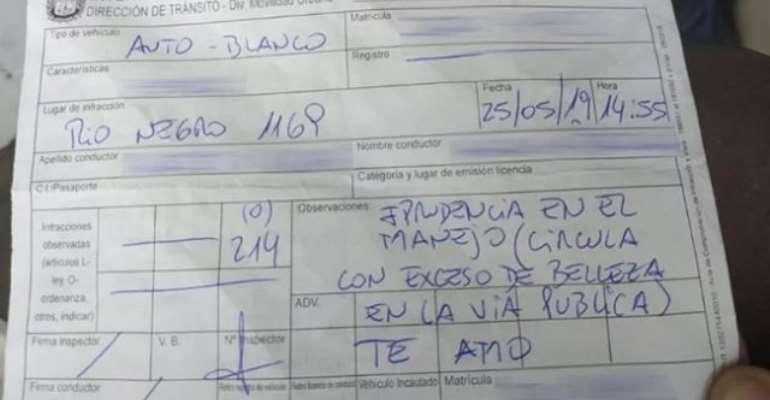 A traffic agent in Uruguay is under investigation for using an official document for unauthorised purposes after it was revealed that he tried to impress an attractive female driver by issuing her a ticket for “excessive beauty on public roads”.

The unusual incident occurred on May 25th, in the Uruguayan city of Paysandú. An unnamed traffic agent allegedly stopped a female motorist and, impressed by her physical looks, he proceeded to write her a ticket for “imprudence while driving (excessive beauty on public roads)”.

To make his intentions obvious, the public servant also wrote “I love you” in the ‘observations’ section of the ticket.

He was just trying to be cute and never imagined that the stunt could land him in hot water, but after the ticket was posted on social media and quickly went viral, his superiors started an investigation.

The controversial traffic ticket got mixed reactions from social media users. While some declared their admiration for the traffic agent’s daring attempt at flirtation, others accused him of abuse of power and harassment. Some people started referring to him as “the enamoured traffic agent”.

The man’s superiors weren’t too impressed with his gesture, and ABC reports that they’ve started an investigation.

He is accused of issuing an official document for unauthorized purposes and, if found guilty, he risks a temporary suspension, demotion, or even getting dismissed from the traffic police.