Khartoum residents in 'state of terror' after bloody crackdown 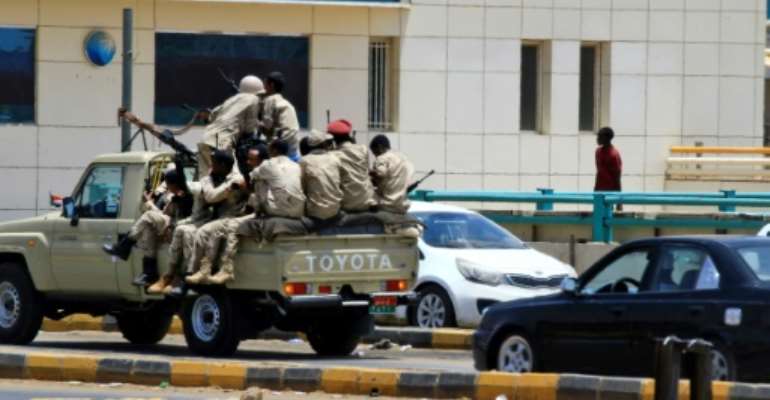 Armed paramilitaries were out in force in Khartoum. By - (AFP)

Members of the Rapid Support Forces, who rights groups say have their origins in the Janjaweed militias of Darfur, deployed on the streets in pick-up trucks mounted with machine guns and rocket launchers, witnesses said.

He said he was "afraid for (his) children to go out in the street", even though the situation was not quite as bad as in previous days.

As international condemnation mounted, a health ministry official told AFP that "the death toll across the country had risen to 61," including 52 killed by "live ammunition" in Khartoum.

Many streets in Khartoum were almost deserted. By - (AFP)

But it denied doctors' claims that more than 100 people had been killed in the crackdown on protesters that began with a raid on a long-running sit-in outside the army headquarters on Monday.

The Central Committee for Sudanese Doctors said Wednesday that 40 bodies had been pulled from the Nile, sending the death toll soaring to at least 108.

The committee, which is part of the protest movement and relies on medics on the ground for its information, warned the figure could rise.

The military ousted longtime president Omar al-Bashir in April after months of protests against his authoritarian rule, but thousands of demonstrators had remained camped out in front of the army headquarters calling for the generals to cede power to civilians.

Despite several initial breakthroughs, talks between the ruling military council that took power after Bashir's ouster and protest leaders collapsed over who should head a new governing body.

Some life had returned to the streets of the capital on Thursday, with limited public transport operating and only a few cars on the roads.

A small number of shops and restaurants were open on the second day of the Eid al-Fitr holiday.

Few people ventured onto the streets of the Sudanese capital. By - (AFP)

But in Omdurman, just across the Nile from Khartoum, a resident said there was a "feeling of terror" about "many military vehicles with all these weapons".

"We hope that this situation will end quickly so normal life resumes," he told AFP.

At Khartoum's airport relatives of travellers stayed late into the night waiting to see if their flights would arrive, following a slew of cancellations over the past few days.

In a harsh move the African Union suspended Sudan on Thursday, demanding a civilian-led transition authority to resolve the ongoing crisis.

"The AU Peace and Security Council has with immediate effect suspended the participation of the Republic of Sudan in all AU activities until the effective establishment of a Civilian-led Transitional Authority, as the only way to allow the Sudan to exit from the current crisis," the AU posted on Twitter.

The AU had urged the ruling generals to ensure a smooth transition of power, but the brutal crackdown to disperse protesters saw pressure mount on it to hold those responsible for the violence to justice.

The United Nations and the British embassy announced they were pulling non-essential staff and their families from Sudan, and the United States warned its citizens to exercise "extreme caution" amid the ongoing uncertainty.

Protesters blamed the bloody crackdown on the "militias" of Sudan's military council. By - (AFP)

Despite the heavy presence of security forces on Khartoum's main streets, the groups that spearheaded the demonstrations against Bashir made a fresh call on Thursday for civil disobedience.

"The revolution continues and our people are victorious despite the terrorism and violence of the militias," the Sudanese Professionals Association, the group that initially launched the anti-Bashir campaign, posted on Twitter.

It urged an "indefinite strike and civil disobedience," warning against calls for violence.

In the northern suburb of Bahri, connecting and smaller roads in the neighbourhood were blocked by protesters putting up makeshift barricades made from rocks, bricks and tree trunks.

The protesters blamed the bloody crackdown on the "militias" of the military council.

The Rapid Support Forces have been singled out by protesters.

Heavily deployed in the streets of the capital, some residents seemed wary of the paramilitaries as they moved around the streets.

RSF commander Mohamed Hamdan Dagalo, widely known as "Himediti," said he was on the side of the "revolutionaries," but warned he would not "allow chaos," referring specifically to the barricades put up in some neighbourhoods.

The ruling Military Council issued a statement hitting out at the "campaign organised on social media aimed at spreading lies and fabricating accusations."

It claimed the RSF "refused to carry out the orders of the former regime to expel demonstrators from the sit-in by force."