By Felix Dade and Tsifodze Ernest 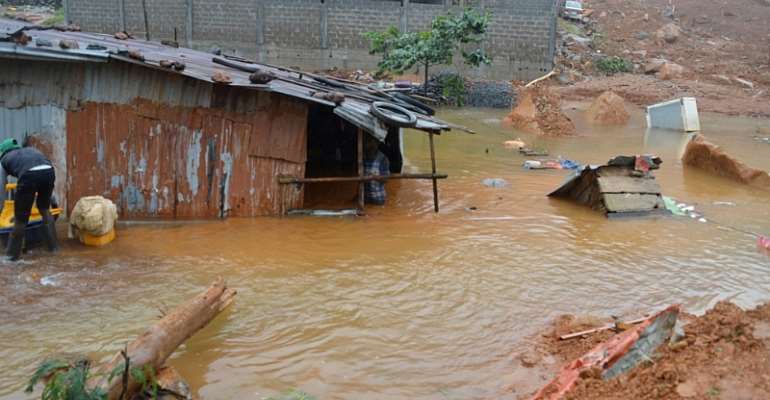 Accra has tried not to be immune to floods. Every year, at the onset of the rains, even the slightest of rainfall, the capital city of Ghana floods. They shame us. They portray how we have not prioritized planning, let alone care about the safety of the people.

Even more painful is the spectre of politicians and leaders who have failed, keep failing, and will fail, taunt-tour areas floods have chocked, killed, destroyed and wiped out livelihood and bonds. After the cameras are shut and their content shown, nothing gets down!

On 3rd June 2015, a painful tragedy occurred. It was a twin disaster (flood and fire). In that disaster, 152 lives were burnt due to an explosion at a fuel filling station. This misfortune followed an unprecedented downpour in Accra, Ghana’s capital. Macabre images of the incidence linger in the mind of many – families, friends, citizens and the international community. For the immediate families, it is a personal scar etched in their hearts forever.

Many questions were raised in the aftermath of the tragedy. Many promises and assurance came along too. In truth, with regards to Accra’s perennial floods, some actions have been taken, although little and slow. Yet, many other proposals are pending till today. Many areas of the city are waiting on the government for a pragmatic approach to tackle the root cause of devastating floods.

Almost always, the solutions to problems are deemed to be government’s sole responsibility. This way of thinking is not in line with participatory democratic practices. Citizens, more than ever, are also responsible in finding long lasting solution to this problem.

In 2012, $595 USD million was advanced to the government as a loan by U.S EXIM Bank for a project in Accra dubbed ‘Sanitary Sewer and Stormwater Drainage’. To date, there has not been any tangible outcome from this project. There is really no effective means of grappling with the flood in the city and every year, the situation gets worse.

Currently, the World Bank is providing the Government full funding to tackle the flood situations in Accra. This time, the project has been dubbed ‘Greater Accra Resilient Project’ (GARI Project). The first phase which will cost $200 US million will tackle the engineering challenges and poor drainage systems. While this initiative sounds good, implementation remains to be seen. Governments in Africa are quick to announce exciting policies and programmes yet show little results as far as implementation is concern.

The observation above is right because for decades, there has been a lot of infrastructure development ranging from roads to buildings. These projects have given Accra a facelift. Nevertheless, rapid urbanisation, coupled with other socio-economic factors, requires much investment in infrastructure. According to World Population Review, 2.27 million people are living in Accra with approximately 56% of the population under the age of 24. This gives an accurate picture of the quest for opportunities in the city by youth. Housing condition of the urban poor in the city is a problem with evidence of settlements dotted on waterways. Some of their settlements are usually seen in areas prone to flood. A typical example are settlements along the Odaw- Korle drainage basin. Thus, in the final analysis, settlers in these low-lying, poverty-stricken areas become vulnerable to flood.

It appears simple to assert that the solution partly lies in relocating these settlers. It is also about pulling down structures in waterways in plush residential communities. The political will to do what is simple and required, sadly, is and has always been lacking.

The impunity ends up as a cycle and systemic. Accra has lost most of its green belt to encroachment from both citizens and developers. Over time, encroachment of vegetative covers has led to rise in slums. Poor planning and siting of structures in Accra fuels an already precarious problem. For example, the green belt in East legon has seen massive development without permission from Accra Metropolitan Assembly (AMA). These are all contributing factors to the floods problem which affect our city and her development. The government must enforce the laws on vegetative covers.

Unfortunately, sanitation is a big issue in the city. Citizens’ attitudes towards waste is appalling and disheartening. There has been conscious effort by the government agencies to provide facilities for citizen in order to ensure proper disposal of waste and achieve environmental sustainability. Citizens settling along the water course dumb waste in the drainage. The effects of this attitude are seen during flooding. Citizens have a role to play in stopping the cycle.

To be able to effective deal with the problem, City authorities should avert their minds to the development of drainage systems. It is sad to note that rain, a big resource in other parts of the world, has become our enemy. Everything is possible. Drainage systems are possible too. Modern engineering technology requires management of surface ruff-off that can save rain for agriculture purposes or even address perennial water shortage among low-income areas in Accra. Our city authorities should be progressive and make the most out of rainfalls.

To conclude, recently, I heard the Minster of Housing announce we need US 1.3 bn to solve the city’s flooding problem. If this is far from the decades of talk, then our collective prayer is with him.