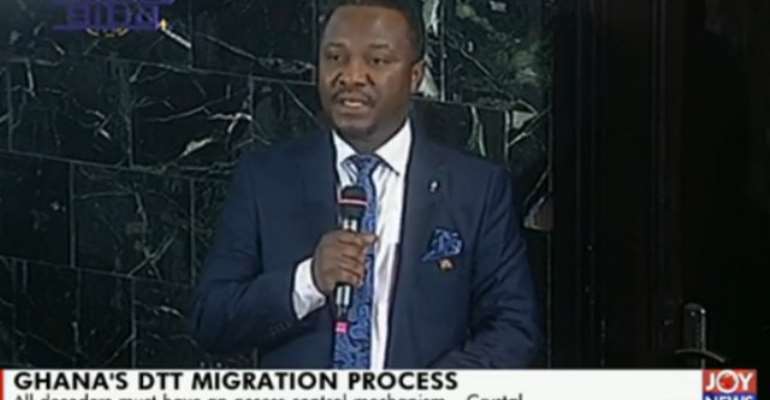 Director of Operatorations of GIBA, Prince Hari Crystal, spoke at a forum organised by GIBA, Thursday.

“GIBA is strongly opposed to the proposal to implement a conditional access system on the digital terrestrial television platform which has been set up primarily to deliver free-to-air- television services to the populace,” Mr. Crystal stated Thursday, June 6, 2019, at a forum in Accra.

The forum was on the theme: “Digital migration and the future of free-to-air television migration in Ghana.”

The Communications Ministry is certain to clash with operators of Free-To-Air (FTA) television service in the country, following a policy which is in the offing to charge viewers of their channels.

Mr. Crystal who is also the Member of the National Media Commission (NMC), was speaking at the forum organised by GIBA to discuss the draft policy which the Ministry seeks to adopt, to regulate broadcasters when the country fully migrates from analogue television broadcasting to digital terrestrial television (DTT) transmission platform.

Currently, two types of television broadcast services, Pay TV and Free-To-Air, exist in Ghana. It is estimated that 99% of the Ghanaian population exclusively rely on the FTA broadcasters to access public information and also make their views heard.

According to Mr. Crystal, who also operates Crystal TV, the Ministry’s directive will require broadcasters providing FTA services to scramble their signals and introduce new decoders that will require viewers on the platforms to pay for the service. This, he believes, amounts to the Ministry “overstepping its boundaries.”

He referenced the Ministry’s own document which says that about 1.1 million out of the 4.6 million Ghanaian households hooked onto the FTA platform are extremely poor and vulnerable. “...then why do you want to charge these 1.1m poor and vulnerable households,”? he asked.

Mr. Crystal likened the development to a saloon car driver being forced to acquire the driving licence of an articulated truck in order to be able to use the road.

GIBA’s position is that “FTA TV must remain free as classified and authorised by the NCA,” Mr. Crystal insisted.

“The Ministry must not charge viewers to pay a digital access fee to enable them to watch free-to-air television when in fact it is the broadcasters who will be paying for the transmission services on the digital TV platform,” which he said requires more viewers for the “sustenance of the free-to-air platform,” he added.

GIBA he said, is also kicking against the government having control over the appointment of the body that will run Ghana’s DTT system. That, he contended, amounts to government foraging into the domain of the National Media Commission.

He indicated that the association would prefer that NMC makes the appointment to insulate the body from governmental control.