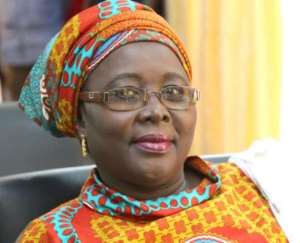 In early 2008, when the then Presidential candidate of the New Patriotic Party (NPP), Nana Akufo-Addo hinted to the powers within his party that his first choice for a running mate was the Minister for Women, Hajia Alima Mahama, the largest opponent were women.

This was disclosed by a private legal practitioner, and family member of the President, Gabby Otchere Darko on Thursday, in a post on Facebook.

According to him, Akufo-Addo desired to give women in the party equal opportunities to serve in various capacities but the move was prevented by the women caucus in Parliament and women organizers of the party at the time.

"In fact, we woke up one morning with two big buses load of Women Organizers across the country parked in front of the candidate's house in East Legon to lobby him against the choice of the woman.

"Frankly, it was disheartening and scary. Extremely. In 2014/15, the same presidential candidate put on the party's agenda how to aggressively ensure that women are selected for winnable seats. But, other pressing intra-party issues at the time derailed that important move. I hope the party will put it back on the table," he narrated.

Gabby Otchere Darko's comment comes on the back of a statement made by President Akufo-Addo at the Women Deliver Conference in Canada, where he is reported to have said he is yet to see dynamism in Ghanaian women.

Some feminists unhappy about the comment have attacked the President about his claim that women need to show more dynamism if they want to get to the decision-making level.