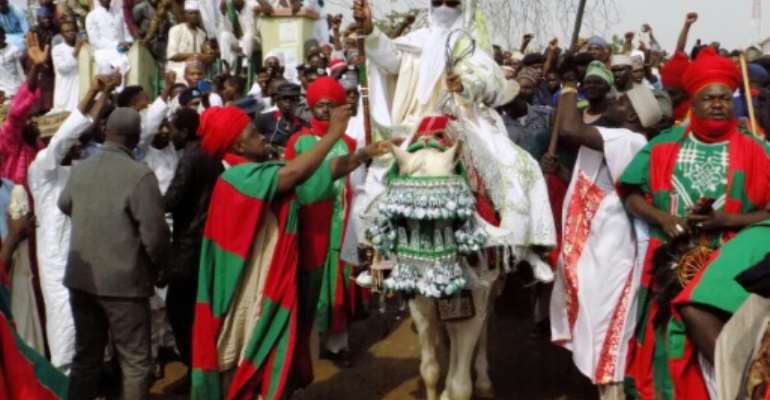 The annual procession sees the traditional mayor of Kano, Muhammadu Sanusi, go through the town on horseback and pay tribute to the governor. By AMINU ABUBAKAR (AFP/File)

The governor of Nigeria's Kano state has cancelled an annual city parade by the powerful traditional emir, officials said Thursday, a sign of the frosty relationship between the two leaders.

The procession in the northern town of Kano, a symbolic march celebrating the power of the monarch, held to mark the end of the Muslim month of Ramadan, had been due to take place on Thursday.

The traditional march usually sees the emir pay tribute to the governor while on horseback.

It also includes a tour of the city with residents lining the streets, beating drums, playing drums and firing muskets.

But the governor's spokesman, Abba Anwar, said the royal carnival was cancelled due to "security reasons."

He said there had been warnings of a possible "breach of peace" during the event.

Sanusi is one of the most important rulers in the mainly-Muslim north, and one of Nigeria's leading Islamic figures.

But last month, Ganduje carved up Sanusi's powers by dividing the ancient Kano emirate into five, a move critics say was a bid to curb his influence.

Supporters of Sanusi say the cancellation of the parade was another move to cut his power.

Sanusi, a former central bank governor, became emir in 2014, inheriting an ancient title over an area the size of Israel with the population of Portugal.

He will comply with the government's decision, his office said.

Instead, he would hold special prayers to commemorate the anniversary of his coronation.

Ganduje, who won re-election for another four years in March, is said to view Sanusi as a critic opposed to his victory.

The state anti-graft agency has recommended Sanusi's suspension from office over an alleged misappropriation of 3.4 billion naira ($9.5 million, 8.4 million euros) of palace funds given by the state government.

The emir's aides are also under investigation for alleged graft.

Sanusi and his aides deny the accusations.