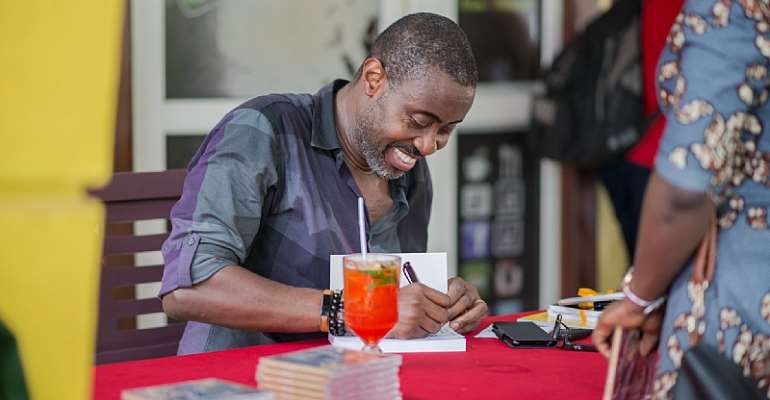 Legal Practitioner and Author, Ace Anan Ankomah, stops over at Takoradi on his nationwide reading and engagement tour.

He will be reading from his well-received book Is There Not A Cause...to Rant? This comes after enthralling readings in Accra and Kumasi which had patrons hooked on his sharp wit, incisive insights and intriguing excerpts from his book as well as broad discussions on national issues.

“Kumasi was different. The audience bought the books right there and then and turned the pages as I read. Some wrote notes! I look forward to Takoradi. I spent my preteen years there and it’s home in more ways than one,” said Ace Ankomah.

The Ace Reads book tour is being organised by DAkpabli & Associates. Since 2015, the firm founded by two Ghanaian writers, has championed book reading and related literary activation events across the country. They believe that a reading nation becomes a thinking and forward-looking nation and so this campaign is part of the agenda for transforming the nation through the promotion of book reading for pleasure across Ghana as well as local authorship.

Under this series so far, Ace was hosted to read by the Calvary Charismatic Centre Conference in Kumasi, last month. Earlier in March this year, his Ghana Voices Series reading, organised by the Writers Project at Goethe Institute, was broadcast live on Joy FM.

Ace Anan Ankomah is the Managing Partner and Head of the Disputes Department at Bentsi-Enchill, Letsa & Ankomah. He is the author of Is There Not A Cause...to Rant? a collection of essays on socio-political issues in Ghana seen through the lenses of a lawyer. Is There Not A Cause... to Rant? is his first book and was published by DAkpabli & Associates.

Ace, called to the Ghana Bar in 1992, holds a Master of Laws degree (LL.M.) in International Taxation (Queen’s University, Canada), a Bachelor of Laws degree (LL.B.) from University of Ghana and a Qualifying Certificate in Law (Q.C.L) from the Ghana School of Law. He is a member of the Panel of Arbitrators of the International Centre for Settlement of Investment Disputes (ICSID) and also served on the Court of Arbitration of the International Chamber of Commerce (ICC) for three years.

Ace is an old student of Mfantsipim Secondary School, where he won the top academic awards: the Senior Scholar Award and the K. A. Busia Award. He also writes music and plays several musical instruments. He served as Director of the gospel music group, Joyful Way Inc. Music & Productions for several years.

Co-founder of DAkpabli, Nana Awere Damoah remarked, “Sitting back and observing the interactions with the audience at Kumasi, I was not surprised when the General Overseer of CCC declared that he would bring Ace and the team back to speak to the entire youth department of the church ‘because these are the issues they need to hear about.’ I expect nothing less in Takoradi.”

Ace Reads in Tadi will take place at the SSNIT Hall, near the Central Police Station, on Sunday 16th June, between 1pm and 3pm. It is an event not to be missed.