The Words Of Ozymandias 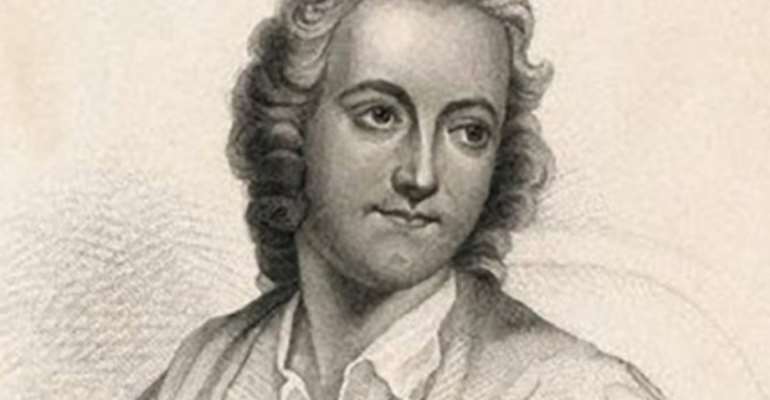 The boast of heraldry, the pomp of pow'r
And all that beauty, all that wealth ever gave,
Awaits alike the inevitable hour
The paths of glory lead but to the grave
ELEGY WRITTEN IN A COUNTRY CHURCHYARD
Thomas Gray

JULIUS CAESAR, CHARLEMAGNE, and NAPOLEON had one common denominator – all were not able to outlast the empires they created. They had garbed themselves in symbols that represented the immortal, but then went to the grave like the rest of humanity. In Longinus's 'The Measure of Man', the writer argues: “Not – how did he die? But – how did he live? Not – what did he gain? But – what did he give? …”

When we write, we are sorry, we are not addressing nincompoops – simpletons, nitwits or people who are “non-compos mentis” (not mentally competent), the likes of Cervantes's Don Quixote de la Mancha or Sancho Panza whose brains were “dried up”. We rather write for people who can aver with Alexander Pope: “A little learning is a dangerous thing. Drink deep or taste not the Pierian spring. There shallow waters intoxicate the brain and drinking largely sobers again.” We share ideas with men and women of wisdom: sagacious individuals; men and women who would listen and pick a cue.

Of course, we would not envy those who are obsessed by Shatta Wale and Stonebwoy, and would die for them for the incoherent hubbub they make. But, please, do not call us old fuddy-daddies because we prefer the cool, romantic, scintillating jibes of Jim Reeves, Kenny Rogers, Elton John (or even) Ramblers, Pat Thomas, C.K. Mann, Amakye Dede or Ampadu.

Thomas Babington writes in 'Horatius': “Lars Porsena of Clusium. By the Nine Gods, he swore that the great house of Tarquin should suffer wrong no more…” One can enthuse himself with the knowledge that Winston Churchill memorized all seventy stanzas of this poem as a boy.

Compare J.J. Rawlings at 33 years in 1979 or 1981 and now. The black and grey hair alone would tell you the man should now be mature. At the 40th anniversary of the June 4 uprising (some of us hate to remember those dark days when women were ordered to: so kanea, dum no: expose your womanhood, close it; when people simply got lost or were openly murdered).

In 1982, Amartey Kwei was only 32 years old, and he wrote a statement to the Special Investigation Board investigating the circumstances of the arrest, and murder of the High Court judges and a military officer. He stated: “… Capt. Tsikata arrived at the Adu Lodge at 11:45pm. He got out of his car and joined (BETTER: boarded) my car. He told me that I was the only person to save the PNDC from collapse. He said the stage that the Investigation Board had reached now, (it) was likely that I would be invited to give evidence. He said that if I was invited to give evidence, I should do all I could to save the government from collapse.”

Rawlings displayed great friendship by escorting Amartey Kwei to the schooling range a place near John Teye Memorial School near Nsawam where the latter was executed by firing squad. Rawlings tries to justify the demolition of Alhaji Yussif's hotel situate in a waterway. Rawlings asserts: “If time were reversible, I would do it again and again and I will take along their new gargantuan structures in the waterways”. Rawlings appears to talk constitutional when he suggests that the 1992 Constitution will have to be rewritten. Huh! Well, perhaps what will touch on all governments is Article 78 which spells out: “Ministers of State shall be appointed by the President with the prior approval of Parliament from among members of Parliament or persons qualified to be elected as members of Parliament, except that the majority of Ministers of State shall be appointed from among members of Parliament.”

The hypothetical 'if' in Rawlings's speech has a positive side in Rudyard Kipling's poem entitled 'If': “If you can keep your head when all about you are losing theirs and blaming it on you … If you can dream and not make dreams your master … Yours is the earth and everything that's in it, And – which is more – you'll be a Man, my son!”

So, a member of Parliament with a pile-up of parliamentary work, at the same time a Minister of State, a member of many boards… Will such a person have time to himself? So, unlike the past, now he/she would not have time to pick up calls or even attend to a party member when that person has travelled a long distance away from home – so, only Thursdays will be days for receiving visitors! And there are umpteen numbers of equal brains wasting away…You see, Kofi Bawuah and Asonaba Dapaah would have been more comfortable with seeing the Chief of Staff herself than going to the young men at the Jubilee House. Reason: she knows how they were all doing in “the trenches”.

One does not need to be a poet laureate to enjoy the poem 'Ozymandias' by Percy Shelley. One may not need to know the distinction among lyrics, elegy, ode, epics, ballad, sonnets … et cetera. Nor would one need to know the distinction between a 'prodesse' (learning) or 'delectare' (pleasure). Of course, Ozymandias, based on Rameses II of Egypt around 1250 BC is a sonnet (14 lines) with a rhyme scheme a b a b a and a loose iambic pentamenter: “I met a traveller from an antique land, who said – 'Two vast and trunkless legs of stone stand in the desert … Near them, on the sand, half sunk, a shattered visage lies, whose frown, and wrinkled lip, and sneer of cold command, Tell that its sculptor well those passions read which yet survive, stamped on these lifeless things, The hand that mocked them, and the heart that fed; And on the pedestal, these words appear: My name is Ozymandias, King of Kings; Look on my Works, ye mighty and despair! Nothing beside remains. Round the decay of that colossal Wreck, boundless and bare The lone and level sands stretch far away” Diodorus Siculus reduced this sonnet into a simple form: “King of Kings Ozymandias am I. If any wants to know how great I am and where I lie, let him outdo me in my work.” Horace Smith gives you a clear picture: “In Egypt's Sandy silence, all alone Stands a gigantic Leg… 'I am great Ozymandias, saith the stone, The King of Kings; this mighty City shows the wonders of my hand. The City's gone…What powerful but unrecorded race once dwelt in that annihilated place.”

Mr. Ellis Owusu Fordjour may not be just a lawyer; he had once been a Minister of State, and he argues, rather perfectly, that “…this nation is blessed by God. We can succeed it only we will do the right things. CEOs must try their best to grant interviews to those who call on them. It is suicidal to restrict callers. Houghoet Boigny, President of Cote d'Ivoire, in his heyday, would organize a party for retired officers of a ministry, with experts sitting on the sidelines … the experts benefitted greatly from the discussions; they would refine the recommendations and submit them to the President…” That night from his Labone residence to mine in Tema, I was musing… But the words of Ozymandias kept ringing in my tympanic membrane. Where does Ozymandias's power lie now?

More Feature Article
ModernGhana Links
There’s Too Much Judgment Of Covid Vaccines And It Sucks
Why homosexuality should be outlawed in Ghana
Knowing Wealth, Metis’ Son
Black People In The Diaspora Must Be Wary Of Becoming The Targets Of Some Of The Worst Kinds Of Misinformation, Which Only Divide Us
Mr President, National Cathedral? WWJD
Rio Tinto in Serbia: The Jadar Lithium Project
Marcel Jacobs: The Italian Who Has Inherited Usain Bolt’s 100m.crown
Higher Learning; Low Expectations
Understanding of “Owing Allegiance” Versus “Declaration-Swearing an Oath of Allegiance”
TOP STORIES