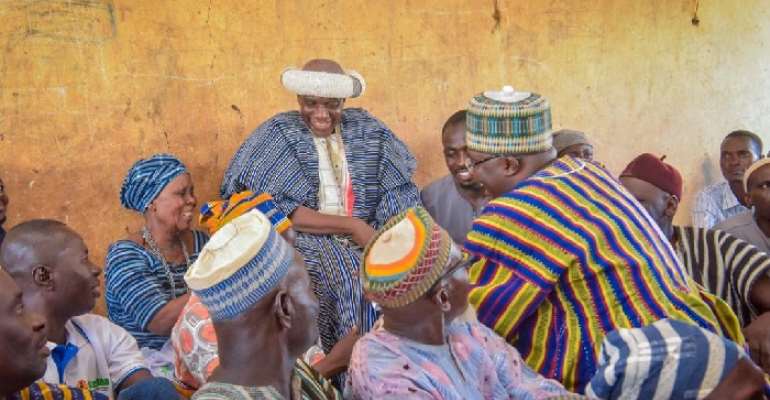 According to him, the creation of jobs in the public sector was to complement the private sector.

He indicated that government has recruited 3,000 Arabic teachers to help in the teaching of Arabic, 54,000 nurses across the country, 100,000 NABCO workers, 45,000 teachers, Forestry and other institutions.

He said government was committed to creating more jobs for Ghanaians.

He made this known when he completed his 2019 nationwide Ramadan tour with visits to Saboba (Northern region), Chereponi, Bunkpurugu, Nalerigu and Gambaga in the North East region where he met…

The Vice President, Dr. Mahamudu Bawumia, has lamented about the effects of conflict between the Konkomba and Chokosis in the North East Region.

According to him, the Microfinance and Small Loans Centre (MASLOC) has for the past four months been finding it difficult to get access to Chereponi District to provide residents with funds for businesses due to the conflict in the area.

“The North regional Masloc boss was telling me they have funds for Chereponi but they have not been able to get it here for four months now because of the conflict,” he said.

Dr. Bawumia urged the Chiefs and people of the feuding parties to focus on how to get developmental projects into their areas instead of fighting each other.

The Vice President said government was looking at places to invest in Saboba and Chereponi to help alleviate poverty but that cannot be done when there’s conflict in the area.

He assured the Chiefs and people of both tribes of government’s commitment to finding lasting solution to the conflict by resourcing the security personnel in the area with enough logistics.

Dr. Bawumia said government would again establish police stations at vantage points in both Saboba and Chereponi to maintain peace in the area.

Akufo-Addo commences process to remove Anin-Yeboah over $5m ...
35 minutes ago