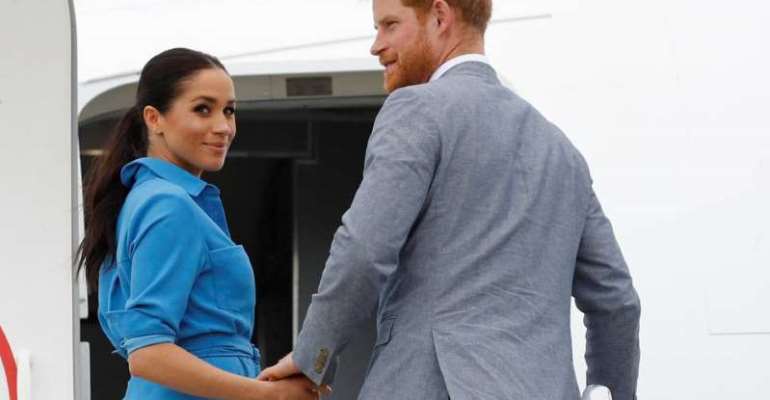 Duchess Meghan is said to have cast her eye explicitly on famous British men. At least one former girlfriend reports that. Is the Duchess so calculating, as everyone says?

Both claim that it was love at first sight: When Prince Harry and Duchess Meghan met at a dinner in London, it should have happened to them at once.

In the past, however, voices have repeatedly been heard claiming that the former actress was a gold digger and had seduced the prince with calculation. At least that's what British TV presenter Lizzy Cundy says.

Meghan really wanted a British friend
Former footballer Cundy has just released a book titled "Tales from the Red Carpet", in which she looks deeply into Meghan's thoughts. After getting to know each other at a charity event, Meghan, then quite unknown in the UK, said, "Do you know any famous men, I'm single, and I love Britons," the Daily Mail quotes the moderator's book.

Hot flirt with Ashley Cole
Then Cundy is said to have assured her to go out with her and to catch her a husband. She thought of footballer Ashley Cole. "I showed Meghan a photo of Ashley and she said, 'Oh yeah, he's cute,'" recalls the presenter. But although Cole then sought a date, the story had fizzled, as Meghan learned of his history as a foreigner. Meghan traveled back to Toronto, where "Suits" was shot and was from 2014 to 2016 only once with celebrity chef Cory Vitiello.

Meghan really wanted to go to London
After separating from Vitiello, Meghan returned to London to settle there. According to the Daily Mail, she wanted to participate in the British reality television show "Made In Chelsea" and also made friends with some of the actors. Meanwhile, she allegedly wrote with presenter Piers Morgan, as he told the Daily Mail. Because: Meghan wanted to be famous in England.

She left Piers Morgan behind for Harry
The same evening, when she met with Morgan for a few drinks to ask him to invite her to his show, she later met Prince Harry at dinner and left the presenter on the left.

"Meghan Markle is a self-obsessed professional actress who has taken her life role and is determined to milk that cow to the very end," said Piers Morgan to the British Journal.

Was Meghan searching during her marriage?
Recently, "The Sun" also revealed that Meghan had contacted singer Matt Cardle, a winner of the British issue "X Factor," during her marriage to Trevor Engelson. He knew Meghan through "suits" and was "stunned" when she followed him on Instagram and wrote him "to be a big fan of his work".

"Matt could not believe that a star like Meghan even knew who he was, he was very flattered, and they talked a little online before suggesting meeting," a source tells Daily Mail. But soon after, the Brit had met his current girlfriend and felt it was inappropriate to keep in touch with Meghan.

She dropped everyone
Lizzy Cundy claims she first learned from the media that Meghan and Harry are a couple, after which she wrote a text message to the then-suits actress saying, "Wow, I heard that from you and Harry." Meghan's answer, according to Cundy, "Yes, I know. We want to try it."

Cundy never heard from her again - as did her friends of Made in Chelsea. "She dropped us all," she writes in her book. However, as a British presenter, Lizzy Cundy is well aware of the court protocol...she admits that the palace may have moved Meghan to cut off all contacts with the press.

We'll not accept the 4% salary increment — Coalition agains...
10 minutes ago