Where is John Mahama When You Need Him in Bole? 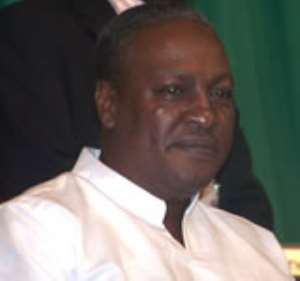 As disturbing as the Bole, Savannah Region, chieftaincy clashes may be, nonetheless, it reminds me of the rather lame and devious attempt by former President John Dramani Mahama, a bona fide native of Bole and the Gonja Kingdom, to desperately and cheaply take an equal share of the credit for the definitive resolution of the Yendi/Dagbon Chieftaincy Crisis with the veritable architect or the real facilitator of the same, namely, President Addo Dankwa Akufo-Addo (See “Dusk to Dawn Curfew Imposed on Bole after Chieftaincy Factions Clashed on Eid-ul-Fitr” DailyMailGh.com/Ghanaweb.com 6/6/19).

Our elders are known to have perspicuously observed ages ago that “Charity Begins at Home.” This keen observer of Ghanaian traditional culture has been wondering what the egomaniacal credit-snatching Son-of-the-Soil was doing, when two rival chieftains, namely, Alhaji Abukari Abusuapanin and Mr. Abdulai Issahaku Kant, were tearing at each other’s throat and jugulars. We learn that this violent rivalry which has so far cost at least one life, has been simmering for some two years now, with the extant Northern Regional House of Chiefs and the High Court of Ghana lining behind Mr. Kant, and the Supreme Overlord of the Gonja Kingdom or State, to wit, The Yagbonwura, insisting that the legitimate heir of the Bole skin was Alhaji Abukari.

For whatever it may be worth, one would have expected the former President to have been hard at work trying to douse the flames that seem to have engulfed his own homestead and, by extension, the land of his birth. Instead, we have Mr. John “Ford Expedition Payola” Dramani Mahama running riot around the country like a undiapered political toddler, claiming to be inalienably entitled to being democratically elected to complete the second of the two terms allowed every President by Ghana’s 1992 Republican Constitution. It also beats my imagination – and you bet, I have an uncannily creative imagination – why Mr. Boot-for-Boot thinks and believes that he has an inalienable right to insult the intelligence of Ghanaian citizens, in particular Ghanaian voters.

You see, not long ago, when a critical mass of disgruntled and depressed small- and medium-scale businessmen and women bitterly complained that they were literally being starved to death by Dumsor, or the perennially erratic power supply, an arrogant and self-infatuated Mr. Mahama contemptuously riposted that only entrepreneurs who lacked creative imagination and practical initiative were complaining about Dumsor. He would later proceed with his infamous declaration that absolutely no Ghanaian citizen reserved the right to impugn – or question – his abjectly poor performance, except the country’s only two living former Presidents, namely, Chairman Jerry John Rawlings and Mr. John Agyekum-Kufuor. Now, what is of utmost importance to underscore here is not merely the fact of his insufferable hauteur attitude but, even more importantly, the very outrageous notion that the hard-won democratic rights of Ghanaian citizens were of far less importance than the personal vaulting presidential ambitions of the former Rawlings’ Communication Minister.

Well, on the very day that his hometown, Bole, was on a fire criminally caused by a chieftaincy dispute, the man whose own late father, Mr. Emmanuel Adama Mahama, was the first postcolonial Northern Regional Minister, was shamelessly running around Ghana’s capital of Accra vacuously blaming his successor for the recent flash-floods that reportedly cost the lives of several people and hundreds of thousands of cedis in property damage. The irony here, though, is that had President Akufo-Addo made any remark to the effect that policies implemented by the government of the New Patriotic Party (NPP) had considerably meliorated a situation that could otherwise have been simply apocalyptic, you could bet your proverbial bottom-dollar that Mr. Mahama would have rhetorically jumped out of his skin and into campaign mode peevishly claiming that it was some visionary policy measures put into place by his party, the National Democratic Congress, that had made it possible for his successor to claim credit for his purportedly successful flood-control efforts.

This was precisely what one of his perennial gofers, Mr. Samuel Okudzeto-Ablakwa, the former Deputy Education Minister, had to say in the wake of the resounding success of the implementation of the fee-free Senior High School System by Nana Akufo-Addo. Well, it is about time Mr. Boot-for-Boot comes public to claim credit for the Bole chieftaincy clashes. At least the curfew part of the dispute.

You're A Blatant Liar; I've Never Attacked Any Religious Lea...
1 hour ago