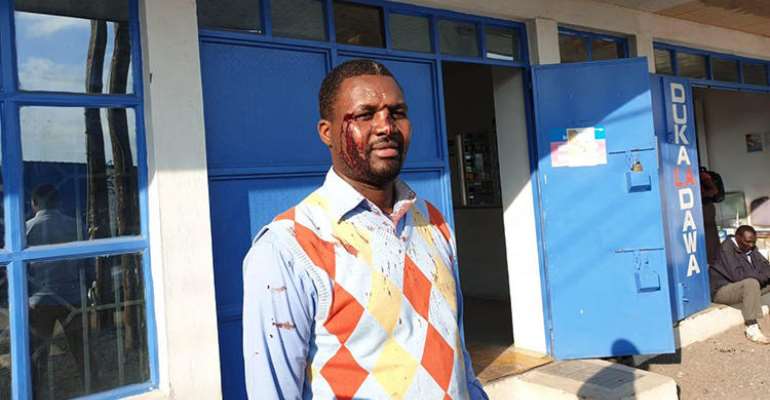 Kenya Television Network cameraman Bonface Kirera Magana is seen outside a hospital in Kyumbi, Machakos county, where he and other journalists went to receive treatment after they were attacked at a local high school. (Image via Standard Group, used with permission)

Kenyan authorities should thoroughly investigate the attack on a Kenya Television Network news team at a Machakos county high school and hold the perpetrators to account, the Committee to Protect Journalists said today.

On June 3, a group of students at St. Steven's Girls High School, a boarding school in Machakos county, and their principal attacked a team of journalists with the privately owned Kenya Television Network, according to news reports and two journalists from the network, who spoke with CPJ.

Students kicked, punched, and threw stones at reporter Carolyne Bii, driver Immaculate Joseph, and cameraman Bonface Kirera Magana, and their principal injured Magana with a rock, Bii told CPJ. Bii received bruises throughout her body from being hit by stones, Joseph suffered cuts on her feet, and Magana was cut on his face and hand, according to Bii, photos of the journalists' injuries seen by CPJ, and Odeo Sirari, the news editor who managed the team, who spoke with CPJ. Bii told CPJ that the crew received treatment at a local hospital and were released later on June 3.

The journalists' car, parked near the school, was later found burned, according to Bii and those news reports.

Following the attack, police arrested the school's principal, John Musyoki Kyalo, and charged him with assaulting Magana, committing malicious damage to property, arson, and inciting violence, according to tweets from the official account of the Directorate of Criminal Investigation and a charge sheet seen by CPJ. The charge sheet alleges that Kyalo committed these offenses "jointly" with unnamed individuals, who have not been charged.

"Mob violence against journalists committed by students at the encouragement of their principal is deeply wrong," said CPJ's Sub Saharan Africa representative, Muthoki Mumo. "It is now upon authorities to ensure that this case is prosecuted rigorously and fairly, to send the message that the government will not stand for impunity in crimes against journalists."

The Machakos Law Courts released Kyalo on a bond of one million shillings ($9,865) after he pled not guilty to the charges, according to reports by the privately owned Daily Nation and The Star newspapers.

The journalists were at St. Steven's Girls High School to cover the story of a student who allegedly went missing in March, Bii told CPJ. The girl resurfaced today, according to the news website Nairobi News .

After the crew and the mother of the missing child spoke with some students at the school, Kyalo threw a stone at Magana and urged students to "remove" the journalists, saying they would tarnish the image of the school, Bii said.

Students then chased the journalists out of the school, beating them as they ran, and the team fled to a police station to report the incident, Bii said. When police and other journalists went to the school, the news team's car was found to have been burned, Bii told CPJ.

The journalists did not witness the burning of the car, but the charge sheet filed against Kyalo alleges that the principal and the unnamed other individuals were responsible. Video published by KTN News shows students attacking the vehicle, but not setting it ablaze. A camera and tripod stand were also damaged, according to the charge sheet.

Six students were injured in the course of the incident, according to a tweet by the Directorate of Criminal Investigation and Athi River Deputy County Commissioner David Juma, a local government official in whose jurisdiction the school falls, who spoke to CPJ via phone. Juma said the students were treated for minor injuries at a local hospital and have been discharged.

Yesterday, the Ministry of Education yesterday closed the school until June 11, according to media reports and Juma.

Alice Gichana, an official from the Ministry of Education who visited the school, said that the ministry had confirmed the attacks on the journalists and condemned such "acts of hooliganism," according to The Star . Juma told CPJ that investigations into the case are still ongoing.

St. Steven's Girls High School Director Kioko Nzeve told the Daily Nation that he was not at the school when the incident took place, but that he was told that the journalists had harassed teachers. According to a report by Kenyan broadcaster Citizen TV , Nzeve accused the journalists of trying to "bring down" his school for "no good reason."

When contacted yesterday morning, Nzeve told CPJ that he was busy with government officials and would speak to CPJ later. He was unreachable when CPJ called back, and attempts to speak to him today via phone and text were unsuccessful.

When reached by phone yesterday, Kenyan Ministry of Education spokesperson Kennedy Buhere referred CPJ to the Teachers' Service Commission, a statutory body that registers and regulates teachers in Kenya. The commission's spokesperson, Kihumba Kamotho, told CPJ that the body would determine whether the principal was officially registered, and would then impose any necessary administrative penalties.