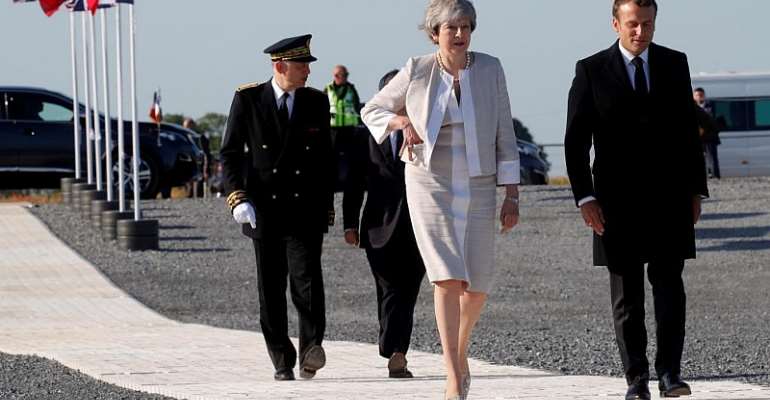 French President Emmanuel Macron looked beyond the current tensions with Britain over Brexit on Thursday as he paid tribute to the neighbours' shared history and "common future" on the 75th anniversary of D-Day.

"Whatever it takes, we will always stand together because it's our common destiny," Macron said in English at commemorations with British Prime Minister Theresa May in northern France.

The two leaders launched the construction of a new British memorial at Ver-sur-Mer in tribute to the thousands of British soldiers who died in the invasion on June 6, 1944 to liberate much of Europe from Nazi rule.

"The current debate takes nothing away -- on the contrary -- from the strength of our shared history and our common future," Macron said, referring to the contentious Brexit negotiations.

He also paid tribute to May, who was making her final international appearance before she formally steps down as Conservative Party leader on Friday.

"It was a pleasure to work and act in confidence with you," Macron said. "Leaders change, but their work remains."

In front of a handful of veterans of the 1944 invasion, May praised their courage.

"Standing here as the waves wash quietly onto the shore below us, it's almost impossible to grasp the raw courage it must have taken that day to leap from landing craft and into the surf, despite the fury of battle," she said.