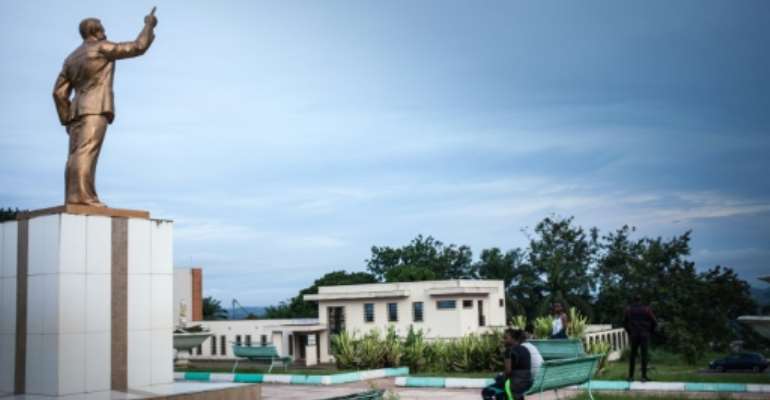 Omar Bongo ruled Gabon for 42 years from 1967 until his death in office ten years ago on Saturday. By CAMILLE MALPAT (AFP)

He died a decade ago, but residents of Franceville in southeast Gabon hark back with deep nostalgia to the rule of former president Omar Bongo.

His heyday was a time of seemingly endless oil wealth and optimism. But the river of dollars has dried up and been replaced by dour, IMF-required belt-tightening.

"We miss him. It is thanks to him that we have the roads, the hospitals and the university too," said Rebecca, a high-school pupil who was just eight when the man she calls "Papa Bongo" succumbed to cancer.

Rebecca and a friend were taking smartphone selfies at an imposing statue of Bongo, who ruled the former French colony for 42 years -- "a father to us all," as she puts it.

"When he was there, there were no money problems," her schoolmate, 18-year-old Jessica, declared at the foot of the statue, a popular spot for youngsters to chat, dance, play and flirt.

Franceville is the capital of the Haut-Ogooue region where Bongo was born in 1935, and also where he was laid to rest. 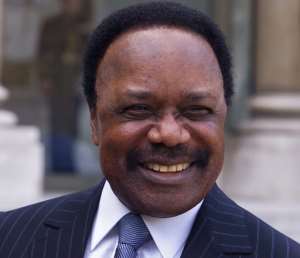 Gabonese President Omar Bongo sought to turn the small, densely-forested nation of slightly under two million inhabitants into an "oil emirate" as the black gold flowed fast and freely.. By Georges GOBET (AFP/File)

It hosts a lavish Moroccan-style mausoleum built on the orders of Bongo's son and successor, Ali Bongo, that will be the focus of commemorations on Saturday for the 10th anniversary of the strongman's death.

The vast tomb is surrounded by fountains and palm trees, decorated with mosaic tiles and fitted with marble stairs and gilded doors -- a far cry from the Benguia II district on the far side of the hill where people live in wood and corrugated iron shacks.

During his reign, Omar Bongo Ondimba sought to turn the small, densely-forested nation of slightly under two million inhabitants into an "oil emirate" as black gold flowed fast and freely.

And even though Bongo's regime was criticised for corruption and a failure to redistribute the wealth adequately, some benefits did trickle down.

"It was Omar who installed the water pump and who built the village school," said Edouard Ngouendji, a resident of the Benguia II, a district that has never known electricity.

"We all vote PDG," he added of Bongo's ruling Gabonese Democratic Party, known by its French initials.

But since Bongo's son Ali took over the reins, oil prices have collapsed and plunged Gabon into an economic slump that has fuelled yearnings for better days under the president's father. 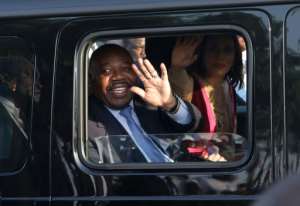 Since Bongo's son Ali took over the reins, oil prices collapsed in 2014 and plunged Gabon into an economic slump that has fuelled yearnings for better days. By Steve JORDAN (AFP/File)

According to the World Bank, the oil sector provided 80 percent of exports, 45 percent of gross domestic product and 60 percent of fiscal revenue on average in recent years.

Oil's slump reverberates today -- a barrel of Brent crude costs around $60 today, 50 percent less than it did in 2014.

In 2017, the International Monetary Fund (IMF) agreed to a financial aid plan for the struggling country on condition of public spending cuts.

Unemployment is up, there is a freeze on hiring in some sectors, and many Gabonese grapple with delays in the payment of their salaries or pensions.

"My father is missed more and more each day as the economic crisis hits households harder," Anicet Bongo Ondimba, one of the late president's 54 acknowledged children, told AFP.

Anger at the tough times have reached even Franceville, a PDG stronghold. 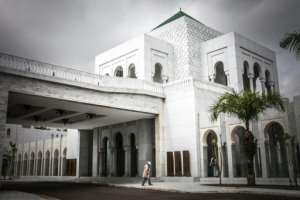 The Omar Bongo mausoleum in Franceville was built on the orders of the late president's son and successor, Ali Bongo. By CAMILLE MALPAT (AFP)

"We were looking at the statue, we told ourselves that under Papa Bongo, they would not have cut the grants," said Rebecca.

On Saturday, Franceville's inhabitants will take part in a commemoration ceremony at the Bongo mausoleum.

Preparations are well under way with teams of groundsmen trimming the lawn while cleaners polish the floors and brasswork and make sure the windows are sparkling.

But not everyone in Franceville is in a grateful mood.

In Benguia II where people have voted for the PDG as long as they can remember, Franklin Ngoulou stands out in a T-shirt sporting the opposition colours.

"Ali promised us work and homes, but just look where we live!" he said. "In the village, I'm the only one to have gone over to the other side."