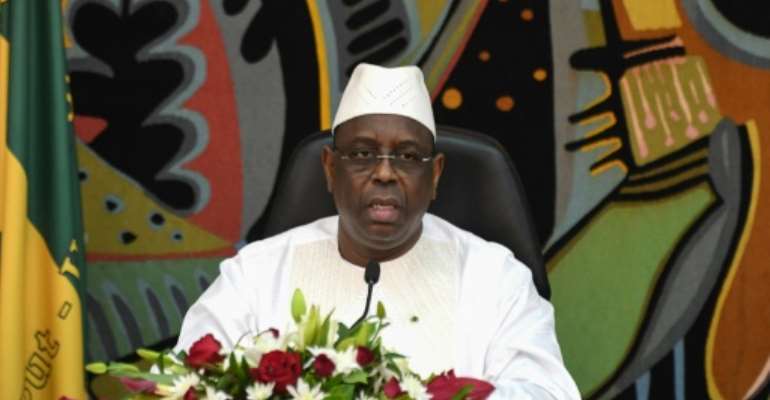 Senegal's President Macky Sall (pictured May 2019) rejected corruption allegations against his brother and vowed the government would pursue the matter, adding: "I want the truth to be reestablished". By Seyllou (AFP/File)

Senegal's President Macky Sall Wednesday rejected corruption allegations against his brother in a BBC investigation as an attempt to destabilise a country hoping to make the most of newly-discovered fossil fuel reserves.

"We know that where there is oil, some will try to destabilise the country," Sall said at prayers to mark the end of the Muslim fasting month of Ramadan.

He vowed the government would pursue the matter, adding: "I want the truth to be reestablished."

Demanding proof of the BBC allegations, he vowed that "If we must punish, we will punish.

"However, we will not accept false accusations."

On Sunday, the British broadcaster said Aliou Sall, a brother of the president, had benefited from lucrative dealings in the gas sector. The brother has denied the claims and said he would file suit against the BBC.

The president Wednesday insisted that "never has a country taken so many precautions to avoid the pitfalls linked to the resources that will be exploited in the coming years."

In 2012, then newly-elected president Sall confirmed a decision taken by his predecessor Abdoulaye Wade to award exploitation rights for two offshore oil and gas fields to the Timis Corporation, controlled by an Australian-Romanian businessman, Frank Timis.

The BBC, in a report broadcast on its Panorama and Africa Eye programmes, said that two years later Timis Corporation secretly paid a "bonus" of $250,000 (222,000 euros) to Agritrans, a company controlled by Aliou Sall.

Lawmaker Ousmane Sonko, who lost out in February elections that returned Macky Sall to office, said Wednesday he was "stunned" by the president's response to the claims he described as tantamount to "high treason".

"Every time the strategy is to deflect attention by hiding cowardly behind the argument of an alleged manipulation by opponents or an attempt by dark forces to destabilise our country," he said.

At his inauguration in April, Sall urged optimism as "it seems new economic perspectives are opening up for our country" in reference to Senegal's plans to enter the hydrocarbons sector in 2021-22 via two oil and gas developments.