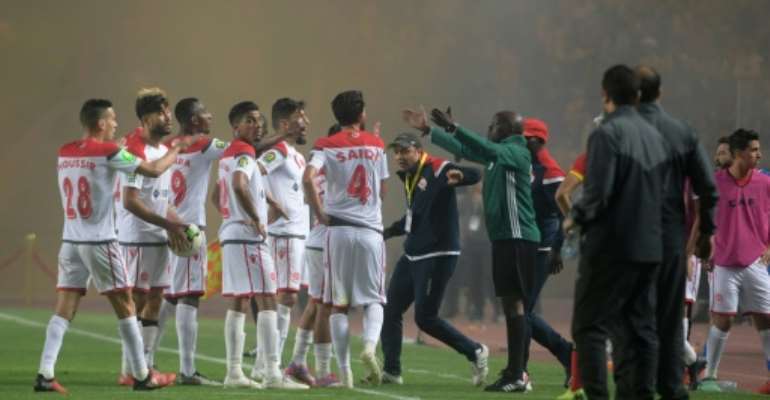 Wydad refused to continue playing after a second-half equaliser was disallowed. By FETHI BELAID (AFP/File)

African football's governing body has ordered the abandoned second leg of the CAF Champions League final between Esperance and Wydad Casablanca to be replayed at a neutral venue after this month's Cup of Nations.

The ruling thrusts African football into chaos just over two weeks before the start of an expanded 24-team Cup of Nations in Egypt, a tournament plagued by a troubled build-up.

Tunisian club Esperance were initially handed the title after Moroccan side Wydad Casablanca walked off an hour into last week's return match in Tunis because VAR was unavailable to judge a disallowed equaliser.

Holders Esperance were leading 1-0 in the second leg and 2-1 overall when play was halted, and after a 90-minute delay the referee awarded the match to the home side.

"The playing and security conditions were not met during the second leg of the CAF Champions League final, preventing the match from reaching its conclusion," CAF presidential advisor Hedi Hamel said Wednesday following a lengthy executive committee meeting in Paris.

"As a result, the match will have to be replayed at a ground outside of Tunisia... (and) Esperance will have to the give trophy back."

"The match will be played after the CAN (Africa Cup of Nations) at a date to be determined," he added, with the tournament due to run from June 21 to July 19.

Esperance are expected to challenge the decision. A club source said officials would explore all viable options, starting by taking the matter to the Court of Arbitration for Sport.

"We're not going to just fold our arms. It's an absurd decision and a dangerous precedent that opens the door to other protests during the CAN," the source said.

The build-up to the Cup of Nations has also been blighted by uncertainty after Cameroon was stripped of the hosting rights in November having fallen too far behind in its preparations.

That left Egypt, appointed as replacement hosts in January, in a race against time after the country was given just six months to ready itself for the event.

Tunisian media reported that officials were aware before last Friday's second leg that the VAR system was not working, but the players seemingly did not know.

Wydad believed they had levelled on 59 minutes when Walid el Karti headed a cross into the net. TV replays confirmed he was onside, but might have fouled an opponent with his shoulder.

The Moroccan team insisted that the Gambian referee check with VAR, apparently unaware that the often controversial system was unavailable.

Wydad substitutes and coach Faouzi Benzarti joined in the protests, while plastic bottles containing liquid were also flung toward the visiting players and staff as tempers flared.

At one stage, CAF president Ahmad Ahmad and the bosses of Esperance and Wydad spoke on the side of the pitch without succeeding in getting the match restarted.

VAR had played a major role in the first leg of the final in Morocco on May 24, with referrals ruling out a goal by Wydad and later appeals for a penalty by the Moroccans in a 1-1 draw.

The Egyptian referee of that match was subsequently banned for six months with CAF saying his performance was "poor".

W/R: Five wounded after residents of Ampatano and Kamfakrom ...
27 minutes ago