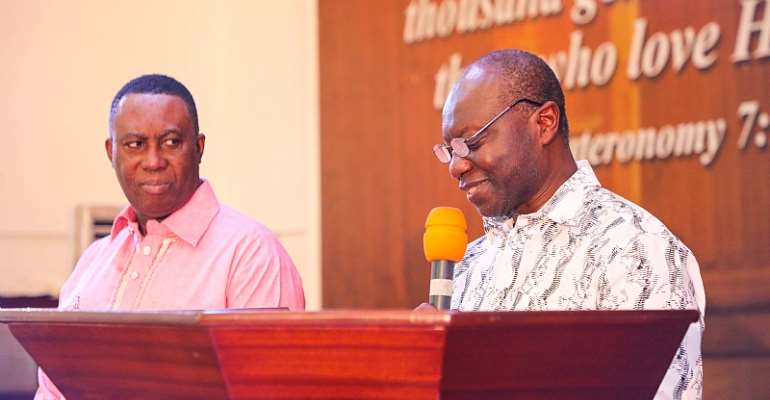 Finance Minister, Mr. Ken Ofori-Atta says the overwhelming victory in the 2016 general elections that saw the National Democratic Congress (NDC) government led by ex-president John Mahama kicked out of power in the December 2016, was a miracle.

The Minister made this observation during a brief stint he had on the podium of the Gospel Light International Church in Accra, to which he visited unannounced for worship, recently.

According to him, the NPP’s victory was a miracle due to the “intercession of Bishop and his friends”.

He, however, stressed that the NPP worked harder towards the 2016 electoral victory, but with prayer interventions from the entire Ghanaian Christendom, concretized by the special secret roles played by Bishop Addae – Mensah.

The Finance Minister, used the opportunity to thank God for the December 2016 elections victory and the General Overseer of the Church, Bishop Mathew Addae-Mensah, for his relentless prayer intercessory activities that backed the unprecedented hard work done by members of the New Patriotic Party (NPP) to wrestle power decisively from the then incumbent NDC government.

“My presence here is more of thanksgiving because Bishop Addae-Mensah has been a wonderful and great friend to me and the government”, Hon. Ofori-Atta, in his calm disposition, told the congregation.

Further eulogizing the General Overseer, he described him as a great man cast in the shoes of other great men who normally did a lot of good things on behalf of others without necessarily making them be aware of it.

“…..And so for the past seven or eight years”, the Finance Minister noted, “he (the Bishop) has raised intercessors that have been working regularly with us on the quiet, assisting us to where we are today”, adding further that, he "would like to use the opportunity to thank Bishop Addae-Mensah for what he had done, and asked God to bless his life."

He added that “he is very different from other Bishops,” saying, "What is concealed from the public is that the activities of this intercessory group are not confined only to Accra but extended across all the regions in Ghana."

The minister also acknowledged Bishop Addae-Mensah, among other things, for his persistent and consistent prayers for Ghana to discover oil in commercial quantities, which yielded results during ex-president J. A Kufuor’s tenure of office, in 2007.

According to him, the New Patriotic Party (NPP) government inherited “a very challenging economy” indicating that, with prudent management through the efforts of the hardworking economic management team, backed by consistent prayers, they have been able to stabilize the turbulence and have now started seeing positive growth.

Hon. Ofori-Atta reminded the congregation of the difficulties his government encountered upon assumption of office, likening it to the Biblical Isrealites’ exodus from Egypt and the miracles of crossing the Red Sea that ensued among others.

According to him, God had wrought similar miracles in the Ghanaian situation thirty months after the NPP assumed power, underscoring that there was the need for the people to put their trust in the Almighty who is reliable and unfailing.

He continued by saying, President Nana Akufo-Addo’s vision was for every Ghanaian to be educated and be healthy as well as enjoying a stable economy with a stable foreign exchange and interest rates.

GHANA’S ECONOMIC OUTLOOK IN 2016
Before the John Dramani Mahama’s NDC – led political administration exited from power by the close of 2016, Ghana’s GDP growth rate was as low as 3.7%. This according to economic and financial experts was certainly not a good record, since in 2011 the country recorded a relatively high GDP growth rate of 14.0%. According to the Bank of Ghana (BoG’s) 2017 report, the 2016 growth rate was the lowest recorded in over two decades. The 2016 growth outcome was a continuation of the downward trend since 2011. It represented a further decline from the 2015 rate of 3.9%.

Again, the BoG 2017 report admits that although the 2016 outturn of 3.6% growth was substantially higher than the anemic rate of 1.4% registered by sub-Saharan Africa (SSA) as a whole in 2016, it still fell short of the 4.1% (revised) target. Moreover, the country’s overall GDP growth rate was below that of the non-oil sector of 4.6% (GoG, 2017), a continuation of the underperformance of the oil sector under the JDM – NDC administration.

The downward trend in growth of the Ghanaian economy became an issue of concern, though falling growth rates were not exclusive to Ghana. Global GDP growth fell from 3.4% in 2015 to 3.1% in 2016, consistent with the trend since 2010. Even though recovery of the advanced economies appeared to have stalled, that of the developing countries continued to wallow in a state of economic stagnation, Ghana inclusive during the NDC regime.

STATE OF GHANA’S ECONOMY IN 2019
The International Monetary Fund (IMF) has recently published that Ghana in this year 2019 will be the fastest growing economy globally. This was against the backdrop of the fact that between the years 2014 to 2016, Ghana’s economy was becoming messy and was also experiencing sluggish growth. However, since the Nana Addo – led NPP administration took over in January 2017, the economy has transformed dramatically. The real GDP growth recovered to 8.5% in 2017 and was estimated to be 6.2% in 2018. This was expected to be driven mainly by the oil sector.

The Ghanaian cedi has also been stabilized against major currencies, except for a slight depreciation against the US dollar in the second quarter of 2018 and 2019. Private consumption has also increased by 6.2% of GDP in 2018. The economy is projected to grow by 7.3% in 2019 and a slower 5.4% in 2020 as the effects of increased oil production from new wells fade.

Under Nana Akufo Addo’s administration, Ghana is gradually building industrial capacity, and growth in industry is expected to grow by 9.8% in 2019 and 5.9% in 2020.

Bishop Addae – Mensah is a man of God who operates uniquely in all the five-fold ministry and in particular the Apostolic and Prophetic gifts. But as characteristic of him, he usually operates on the quiet. In 2007, he boldly sent a word to President Kufuor to grant him access to anoint the independence square on behalf of the people of Ghana for God to favour the country with oil in commercial quantities.

In March 2007, the President delegated the then Minister of the Interior, Hon. Kwamina Bartels to represent the government and the state to go and join Bishop Addae-Mensah for that important and special spiritual exercise to be carried out. Present also was a section of the congregation of his church, Gospel Light International Church.

After the prayers which lasted for about an hour, with the anointing of the grounds, he declared God had revealed to him months ahead that by the end of the second quarter in 2007, Ghana was going to hit oil in commercial quantities. He then told Hon. Bartels to go and deliver that message to President J.A Kufuor. It then became manifest that in July 2007, through a consortium comprising Kosmos Energy, Anadarko and Tullow Ghana Limited, oil was discovered in commercial quantities for the first time in Ghana’s history.

On the recent Ghana and Cote d’ Ivoire maritime dispute in which judgment was ruled in favour of Ghana, four months before the final determination of the case, Bishop Addae-Mensah informed Hon. Ken Ofori – Atta that the Lord had instructed him to go and touch the soils of Cote d’Ivoire with anointing oil, and that He (God) was going to do something spectacular to favour Ghana in the case.

He followed up this spiritual direction with a month’s fasting and prayers. Soon after ending the fasting, he personally paid for his flight, went and spent three days in Cote d’Ivoire. When he returned he met with Hon. Ken Ofori – Atta and assured him that God had spoken and Ghana was going to come out victorious in the case being determined by the International Tribunal on the Law of the Sea (ITLOS).

He also said while praying in Cote d’Ivoire the Lord said to him that in the days ahead more oil was going to be discovered in Ghana. This has also manifested subsequently.