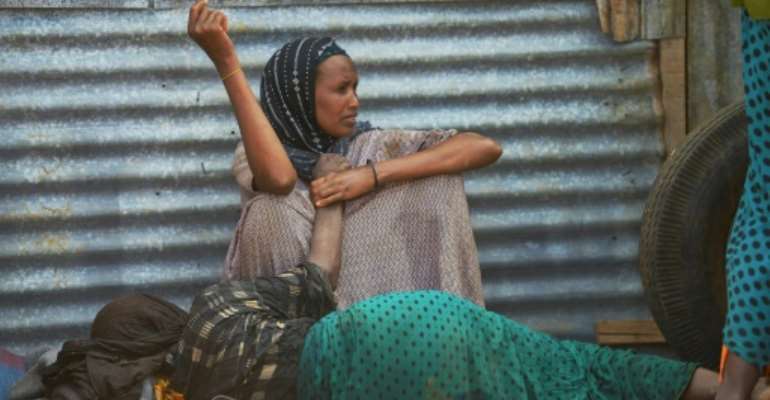 An elderly woman weakened by hunger lies on the ground as her daughter watches over her at a camp for the internally displaced on the outskirts of Baidoa town, the capital of Bay region of south-western Somalia. By TONY KARUMBA (AFP)

Somalia is facing severe hunger due to one of the worst droughts in decades, the UN aid chief warned Wednesday.

"What was forecast to be an average rainy season in Somalia is now one of the driest on record in over 35 years," said Mark Lowcock, the UN under-secretary-general for humanitarian affairs.

The UN has released $45 million in emergency funding to scale up food, water and other humanitarian supplies to Somalia as well as parts of Ethiopia and Kenya.

The bulk of the funds, $30 million, will help Somalia, where 2.2 million people are expected to face severe hunger by September -- an increase of 40 percent from January.

An additional 3.2 million people in Somalia are expected to struggle to meet their basic food needs over that same period.

Lowcock said in a statement that drought in Somalia was intensifying faster than has been seen over the last decade.

The failed April to June rainy season comes on the heels of below-average short rains during the season between October and December.

"Communities that were already vulnerable due to past droughts are again facing severe hunger and water scarcity and are at risk from deadly communicable diseases," said Lowcock.

"Aid agencies in Somalia are also overstretched and grappling with a severe lack of funding," he added.

The UN is requesting $1.09 billion this year for its humanitarian response plan for Somalia, but only 22 percent of that amount has been raised.

Somalia suffered a heavy toll from two major famines in 1992 and 2011 caused by drought and exacerbated by conflict.