Can the Chinese dragon join the Russian bear to beat the US eagle? 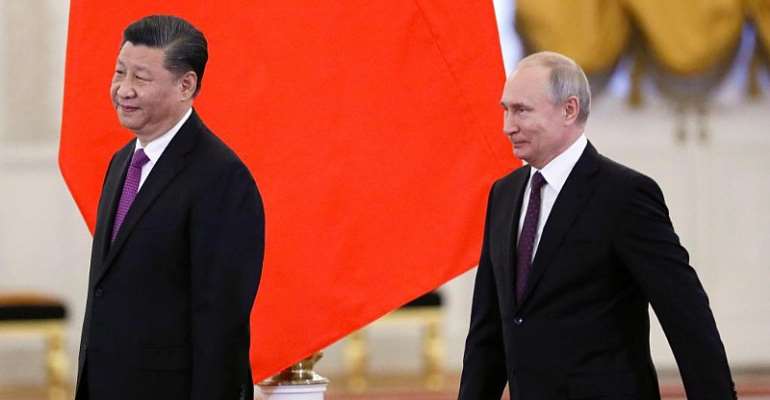 Chinese President Xi Jinping and Russia's Vladimir Putin praised their countries' ties during a meeting in the Kremlin on Wednesday, as Beijing and Moscow seek to shore up cooperation because of tensions with the US.

Putin said the Chinese visit was a "key event" in relations between the two neighbours.

"Our relationship will be better and better," said Xi, who was received with full honours when he arrived at Moscow's Vnukovo airport in the afternoon.

The trip comes five years after Moscow's annexation of Ukraine's Crimea peninsula led to a serious rift with its Western partners and a turn toward its neighbour to the east.

But the alliance could yet be stronger.
The Sino-Russian “treaty of cooperation and friendship which was signed in 2001 doesn't go that far,” says Jean-Pierre Cabestan, author of China tomorrow: democracy or dictatorship?

“It means that if there is war between China and the US, I don't think that the Russians will automatically support the Chinese."

But over the last thirty years, the strategic partnership has intensified, with China importing raw materials and Russia importing industrial and consumer products from China. To show their mutual commitment, Moscow and Beijing engage in joint military exercises and play key roles in the Shanghai Cooperation Organisation, a group that was created to safeguard security in the region.

On a political level, the two countries are on the same wavelength, says Cabestan. They both vote against US-inspired proposals at the United Nations, they both want to change the international order established after WW2, moving away from western institutions such as the IMF and the World Bank.

But there are still major differences.
After the fall of the Iron Curtain and the demise of the Soviet Union, Russia organised the so-called Commonwealth of Independent States and later they started to experiment with the Eurasian Economic Union s to try and expand Moscow's economic clout.

But China lashed out in 2013 with its Belt and Road Initiative (BRI) which now includes most countries on the Eurasian continent.

“In the beginning, Russia was pretty lukewarm about the BRI,” says Cabestan. But intensive Chinese diplomacy succeeded in changing Moscow's mind. “Putin seems to be more enthusiastic about the BRI, and is ready to cooperate,” says the analyst, adding that “within Russia itself there is still some opposition to it, because Russia wants to promote its own Eurasian community with Kazakhstan and Belarus.

“But it is hard for the Russians to compete with the BRI because a lot of money comes in from China, including infrastructure projects that are going to be realised through this initiative."

Other frictions include Moscow's fears of increasing Chinese influence in Siberia's Vladivostok and Chabarovsk regions. Increasingly aggressive Chinese merchandising had the population around Lake Baikal up in arms when a Chinese company wanted to use the lake to produce bottled water on an industrial scale.

But overall, China's links with Russia have strengthened compared to its relations with the US. When Washington re-established diplomatic contact with Beijing in 1979, China and the US cooperated in a secretive military program where the National Security Agency equipped a series of listening posts along the Sino-Russian border in Xinjiang to monitor movements of USSR troops. Information was to be shared between the US and Chinese military.

Today such intimate cooperation no longer exists. “Its raison d'être ended with the end of the Cold War,” says Cabestan.

“Since then, the Chinese army has become a meaningful military force. For the US now it is more important to monitor the Chinese than the Russian military,” he says.