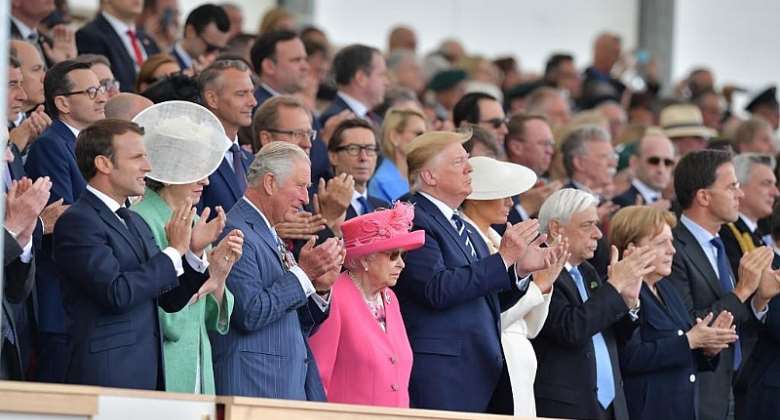 French President Emmanuel Macron has accompanied US President Donald Trump and Queen Elizabeth II in Portsmouth, southern England, on the first day of commemorations of the 75th anniversary of D-Day, the largest seaborne invasion in history that turned the tide of World War II.

Trump and Macron were among several heads of state or government to address 300 WW2 veterans in Portsmouth, along with the Queen and Prince Charles, giving them a standing ovation as the ceremony began with a movie of the Normandy D-Day landings.

Trump read a prayer given by Franklin D. Roosevelt in 1944 to the veterans assembled at the ceremony.

"Almighty God, our sons, pride of our nation, this day, have set upon a mighty endeavour, a struggle to preserve our republic, our religion and our civilisation and to set free a suffering humanity," read Trump.

Macron reading a letter from a young 16-year old French resistance fighter to his parents before he was captured and killed.

But before reading the letter, he told the veterans: "First, let me thank you sincerely, on behalf of my nation," rousing cheers from the attendees.

The D-Day invasion started for many allied soldiers in Portsmouth, England, where they sailed to the beaches of Normandy, France, to defeat the Nazis, a move that would change the future of Europe and the world.

German Chancellor Angela Merkel told journalists she was grateful to be able to participate in the 75th anniversary in Portsmouth, calling it a "gift of history". She described D-Day as a "unique military operation eventually brought us the liberation from the Nazis".

"The wartime generation - my generation - is resilient, and I am delighted to be with you in Portsmouth today," she said. "The heroism, courage and sacrifice of those who lost their lives will never be forgotten. It is with humility and pleasure, on behalf of the entire country – indeed the whole free world – that I say to you all: thank you," she added.

Trump has used the opportunity to emphasise the strong bond between the US and Britain. After the event, he met the American World War II veterans present who participated in D-Day. The soldiers, sailors and airmen were among the more than 1.5 million American servicemen who had been stationed in the UK during the war.

The countries agreed to a D-Day proclamation to "ensure that the unimaginable horror of these years is never repeated".

The 300 D-Day veterans are leaving Portsmouth on a specially commissioned ship, the MV Boudicca, to take the same trip they embarked upon 75 years ago across the English Channel. The vessel will be accompanied by Royal Navy ships and a WW2 Spitfire plane.

On Thursday, veterans who are at least 90 years of age will parachute into Normandy with French army paratroopers and British air assault troops to re-create the landings.