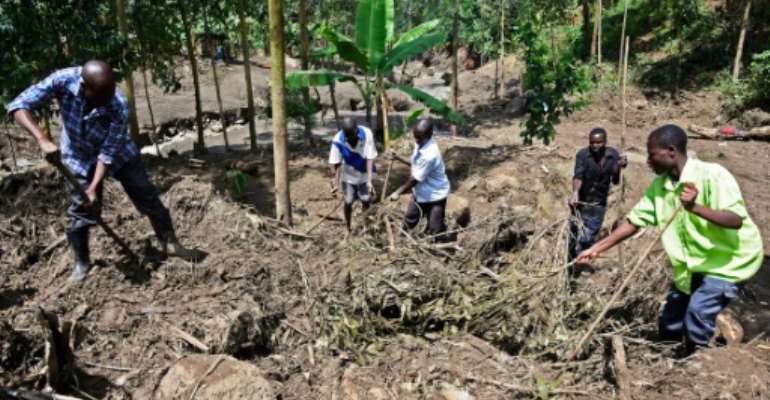 In 2018 at least 41 people were killed after a river in the Bududa region burst its banks. By Isaac Kasamani (AFP)

Six people have died and dozens are missing after heavy rains triggered a series of landslides in eastern Uganda's mountainous Bududa district, government officials and the Red Cross said on Wednesday.

The Red Cross said that around 50 people were believed missing after the landslides on Tuesday night in the foothills of Mount Elgon -- an extinct volcano with five major peaks.

"There were several other small landslides. Seventeen people were injured," including eight children.

"Fifty households have been displaced so far. However, assessment is still ongoing and the number is expected to rise," Onek added.

"There were multiple landslides," in Bududa district, "but for now Red Cross has concentrated in the worst hit areas", she said in a statement.

"The local Red Cross branch volunteers together with the local police joined efforts and retrieved the bodies.

"The affected areas have steep slopes. It is threatening to rain again (and) accessibility is still a challenge," she added.

"It is a tragic occurrence. Many people are said to be dead and many missing but we are trying to get the details as the terrain here is difficult to manoeuvre and get to the affected villages."

Bududa district, which lies on the border between Uganda and Kenya, is a high risk area for landslides.

A statement from the office of Prime Minister Ruhakana Rugunda said that "there are reports of displacement and destruction of property as well as missing persons".

Ater the 2010 landslide, the government said that the region, where people live on extremely steep slopes, was too dangerous to be lived in and that a programme was under way to re-locate residents.

"In total, over 100,000 people living precariously on the slopes of Mount Elgon are estimated to be at great danger and requiring relocation" to avoid the danger of landslides, said the statement from Rugunda's office.

A 2016 study into the high occurence of mudslides and flooding in the region pointed to deforestation and over cultivation of the land as the local population booms, reducing the stability of the soil.