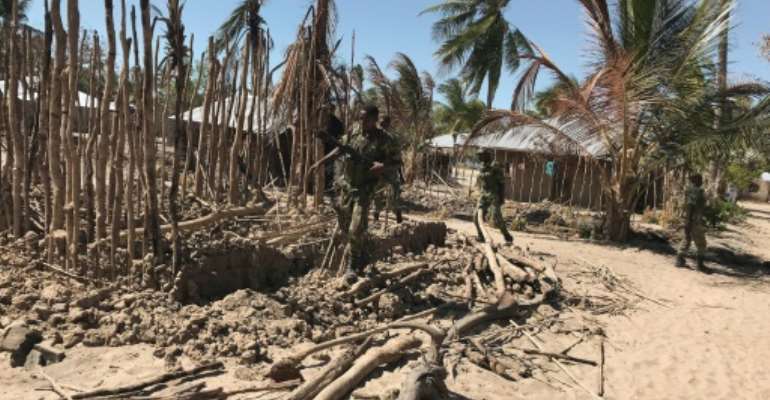 Villages in remote northern Mozambique have been repeatedly attacked by a shadowy Islamist group -- more than 200 people have died since 2017. By Joaquim Nhamirre (AFP)

The Islamic State group has claimed it was involved in an insurgent clash in Mozambique for the first time, but an expert expressed doubt and police dismissed the claim outright.

A jihadist insurgency has been growing in the northern Mozambican province of Cabo Delgado since 2017, with more than 200 people killed and many villages torched.

According to SITE Intelligence, a company that monitors extremist activity, Islamic State issued a statement late Tuesday claiming involvement in an apparent gunfight with the Mozambique military in Cabo Delgado.

"The soldiers of the Caliphate were able to repulse an attack by the Crusader Mozambican army in Metubi village, in the Mocimboa area," said the statement, according to a SITE translation.

"They clashed with them with a variety of weapons, killing and wounding a number of them.

"The mujahideen captured weapons, ammunition, and rockets as spoils."

Insurgents regularly attack villages, kill local people -- sometimes beheading them -- and burn down houses despite a heavy police and military presence in the province that borders on Tanzania.

An expert on the Mozambique insurgency, who declined to be named, said Islamic State were unlikely to have any direct contact with local fighters.

He said the attack claimed by IS had not been reported locally, and the village of Metubi was not in Mocimboa da Praia district.

"I think we have to be careful. Islamic State is not in Mozambique. It is just propaganda, but they might have links," the expert said.

"Islamic State are struggling to survive but want to give the idea that they are active in Africa."

Police on Wednesday dismissed the Islamic State claims, which came as Muslims worldwide marked the holiday of Eid al-Fitr after the holy month of Ramadan.

"The security forces distance themselves from these reports," police spokesman Orlando Mudumane told reporters in Maputo.

"The information is not true. The police reiterate the readiness of the security forces to combat whatever wrongdoers do."

The police and government have a policy not to comment on any insurgent activity, even if attacks are confirmed by local people.

Using local sources, AFP tracked the unrest through May, recording 14 attacks and more than 40 deaths.

Attacks have forced the temporary closures of voting registration stations ahead of October elections.

Lucrative gas fields off Cabo Delgado add an extra dimension to the insurgency as international exploration companies have been caught up in the violence.

According to local sources, 16 people were killed in a highway ambush on May 31, in the highest single death toll of the insurgency.

Attackers threw home-made explosives into a truck -- a new tactic -- and then opened fire.