Zanetor Must Thank God Akufo-Addo Is Not Like Her Father 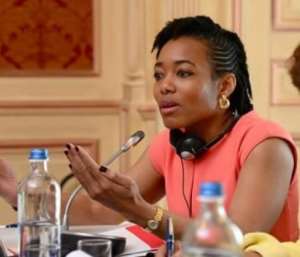 At 41 years old, the National Democratic Congress’ Member of Parliament for the Korley-Klottey Constituency, in Central-Accra, in the Greater-Accra Region, is old enough to have learned something practical about the annual seasonal flooding of not only Ghana’s capital but the massive after-downpour flash-flooding of the country at large. So, it is nothing short of scandalous for the Irish Republic-trained physician to claim that the deadly flooding of Ghanaian cities, towns and villages only began with the accession of former President John Dramani Mahama to the presidency and the erstwhile Flagstaff House in July 2012 (See “If Akufo-Addo Can’t Fulfill His Lofty Promises, Simply Hand Over Power to Us – Zanetor” 6/4/19).

Maybe somebody needs to remind this thievish (Fiafito) political upstart that she is outrageously out of touch with the objective chain of events that led Ghanaians to the sort of horrific mess in which we find ourselves presently. Indeed, if she was not criminally out of touch with the grim reality on the ground, Dr. Zanetor Agyeman-Rawlings would long have come to knowledge of the fact that the deadly flooding of the country after heavy downpours – which, by the way, is also quite common here in the United States – has existed since colonial times and well before then. What this means is that during the twenty bloody years that her military strongman half-Scottish father, Chairman Jerry John Rawlings, ruled the land like an absolute monarch or a cutthroat despot, the seasonal massive and deadly flooding of Accra and other towns and cities around the country was no significantly better than it is today.

To be bold and certain, so inimitably incompetent was former President Rawlings that of all past Ghanaian leaders, it was this professional coup-plotter and blood-thirsty “revolutionary” who did the least to facilitate the jealous protection of our environment and the improvement of the quality of healthcare and the safety of Ghanaian citizens and residents. It had to take his political opponent and successor, to wit, President John Agyekum-Kufuor, to build the levees or seawalls in Mr. Rawlings’ own hometown of Keta, in the Volta Region. It is also rather ironic for MP Zanetor Rawlings to have professionally trained as a doctor, because her father was also uniquely infamous for having effectively destroyed the country’s healthcare system. For example, it was during the democratically elected tenure of Chairman Rawlings that the irredeemably inhumane Social Darwinian health policy of Cash-and-Carry or pay-upfront-or-perish-in-default – or, if the Dear Reader likes, the Devil-May-Care – was introduced into the country.

Here again, and once again, it would take the auspicious accession of President Agyekum-Kufuor and the latter’s introduction of the National Health Insurance Scheme (NHIS) to turn things around for Ghana’s poor and destitute to be able to practically exercise their civilized and inalienable human right of gaining free access to healthcare provision and free medical treatment. Mr. Rawlings would also treasonously introduce the Chinese-produced Changfang excavators to effectively and criminally lay our arable lands to waste in the inglorious name of Galamsey, or small-scale illegal mining. In sum, if she really wants to know or to be told the truth upfront, as a matter of fact, the state-owned house-snatching leaders of the National Democratic Congress (NDC), of which Dr. Zanetor Rawlings is a prime beneficiary, have absolutely no progressive development-policy agenda and/or initiative to present to Ghanaians in the leadup to the 2020 general election.

She does not have to look farther than the performance track-record of former President John Dramani Mahama, the man whom her own father, the former Flt-Lt. Rawlings, has perennially, consistently and incessantly described as the most corrupt postcolonial Ghanaian leader, whose thievish exploitation of hardworking Ghanaian citizens makes the Ignatius Kutu Acheampong-led junta of the National Redemption Council (NRC), subsequently renamed the Supreme Military Council (SMC-1), seem like Vacation in Paradise or the Golden Age of postcolonial Ghanaian political culture. And, of course, it is for this reason why one wonders why Dr. Zanetor Rawlings would joyfully and presumptuously traipse around the Accra metropolis, with Mr. Mahama, self-righteously faulting President Addo Dankwa Akufo-Addo for not using his purported magic wand to literally wipe away decades of negligent leadership of the Chairman Rawlings-founded and led political juggernaut that is the so-called National Democratic Congress.

Indeed, it has been said innumerable times that “Politics makes for strange bedfellows.” If, as it clearly seems to be the case, this sassy “He-Woman” is scheming to smoothly and opportunistically ride on the crest of the bloody image and reputation of Mr. Rawlings, as a means of partnering a military fatigues-wearing Mr. Mahama into the 2020 Presidential Election, trust me, Dr. Zanetor Rawlings is in for an apocalyptically seismic shock of her life. Ghanaians have fast and healthily matured and become intellectually and morally sophisticated enough to be able to differentiate and decide between impenitent and reprobate robber-baron charlatans and genuine and progressive leadership lodestars like President Akufo-Addo and Vice-President Mahamudu Bawumia, among a remarkable platoon of others.

But, of course, it goes without saying that one cannot wholly blame Dr. Zanetor Rawlings for being so treasonously out-of-touch with the stark reality of Ghanaian political culture. You see, this is a woman whose demonic and despotic father jealously shielded her and her siblings from the harsh realities of life under the Rawlings-led Provisional National Defense Council (PNDC), by flying her abroad, gratis, on military jets of the Ghana Airforce purchased with the money of the Ghanaian taxpayer to school in the Irish Republic-located and elitist Royal College of Surgeons, while the Chairman Rawlings callously closed down the country’s leading institutions of higher learning and put the children of other Ghanaian citizens out on our streets and callously consigned their futures literally to the dogs. And, by the way, did Dr. Zanetor Rawlings recognize the fact that the epicenter of the recent Accra floods was located at the Kwame Nkrumah Circle, where then-President John Dramani Mahama personally supervised the shoddy construction of a flyover nicknamed Duba1?

Or is it simply because, like her clinically certified terrorist father, Dr. Rawlings abjectly lacks the requisite conscience to fully appreciate the truth about the veritable political house-of-cards that is the performance track-record of the former Rawlings-appointed Communication Minister? The Korley-Klottey NDC-MP may also want to critically examine the sanitation track-record of Candidate John Dramani Mahama before putting her diamond foot in her silver mouth.